The Global Media Controls feature in Microsoft Edge Chromium now includes the Picture-in-Picture button, allows you to go to PiP mode much faster. The change is available in Edge Canary starting in build 82.0.442.0. Here's how to activate it.

Microsoft is working on an enhanced version of the 'Global Media Controls' feature for their newest Chromium-based Edge that allows controlling all active media sessions in the browser from a single flyout.

Microsoft is actually trying to improve the existing functionality of Chrome. Recently Google has started working on the 'Global Media Controls' feature. Chrome includes an experimental feature that shows a popup that is similar to the one that appears when you press multimedia keys on your keyboard. As of now, it handles the active media session only. Microsoft's implementation lists all the media sessions running in the browser, and allows you to pause or continue running them. So, if you have multiple tabs in the browser that play sounds, like YouTube, Spotify, and Vimeo, you can manage their playback from a single flyout. You can easily play, pause, and skip media content available on any web page.

Picture-in-Picture mode opens videos that play in the web browser in a small overlay window which can be managed separately from the browser's window. Most of the modern web browsers support this mode, including Chrome, Vivaldi, Opera, and Firefox. 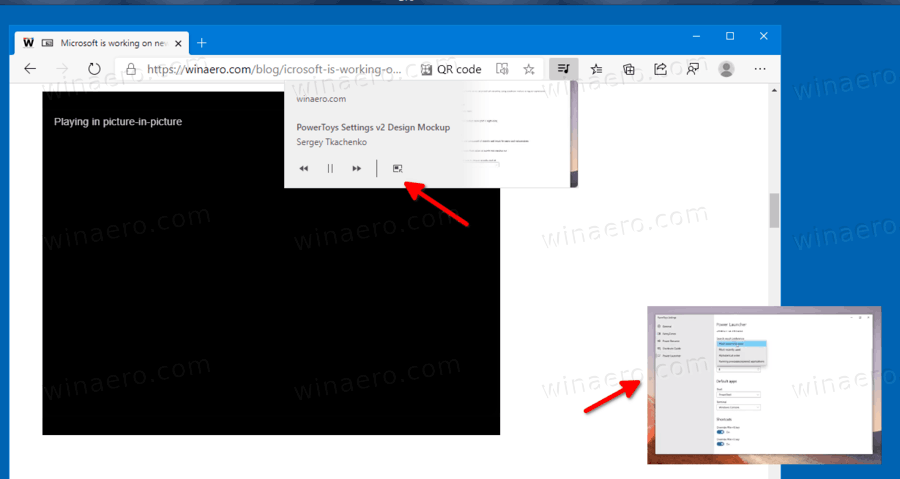 With the latest Canary update, Microsoft Edge now shows a dedicated button in the Global Media Controls flyout to open the media stream in PiP mode. By default, the button is hidden, but it is easy to enable it.

Now, open any YouTube video and click on the media button in the toolbar. You should see a new PiP button that opens a dedicated video flyout for the video that remains always on top of other windows until you close it.