As you may remember, Microsoft was working on the enhanced version of the 'Global Media Controls' feature for their newest Chromium-based Edge that allows controlling all active media sessions in the browser from a single flyout. Today's Canary build of Edge comes if a few improvements made to the Global Media Controls feature.

Microsoft is actually trying to improve the existing functionality of Chrome. Recently Google has started working on the 'Global Media Controls' feature. Chrome includes an experimental feature that shows a popup that is similar to the one that appears when you press multimedia keys on your keyboard. As of now, it handles the active media session only. Microsoft's implementation lists all the media sessions running in the browser, and allows you to pause or continue running them. So, if you have multiple tabs in the browser that play sounds, like YouTube, Spotify, and Vimeo, you can manage their playback from a single flyout. 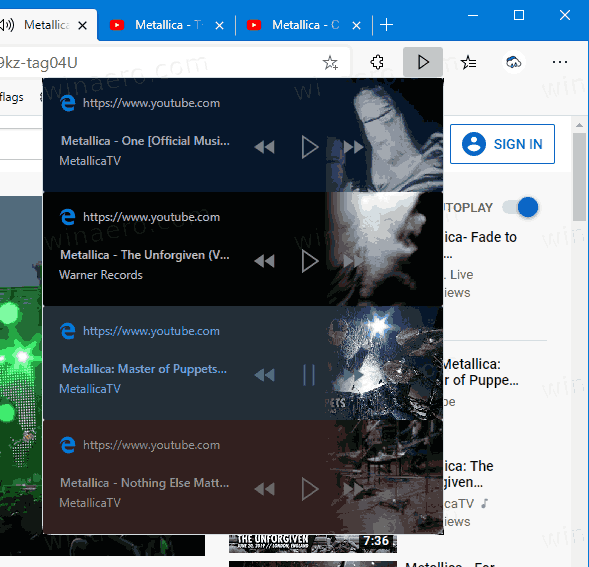 Starting in Edge 78.0.276.0, which is now available in the Canary branch, the toasts in the media flyout have received a dismiss button:

Here is how it works in action:

This minor, but useful change improves usability of the feature by allowing the user to quickly get rid of unwanted media streams.

The description for this change states the following:

This CL adds an X button to the sessions in the Global Media Controls dialog (when paused) that dismisses the session from the dialog. This also updates the MediaNotificationContainer API to receive MediaSessionInfo updates and foreground color updates so that we know when to show the button and what color to make it.

If you do not see these options yet, this is because Microsoft is rolling out new features gradually to Chromium-based Microsoft Edge users with the Controlled Feature Rollout (CFR). It is a procedure used to roll out new features to small randomly selected groups of users so that they can be tested.