The stable Edge Chromium branch has received a new update. It looks like this branch shares the updates with the Beta channel. As of now, Edge build 77.0.235.17 is available both in the Beta and Stable branches. 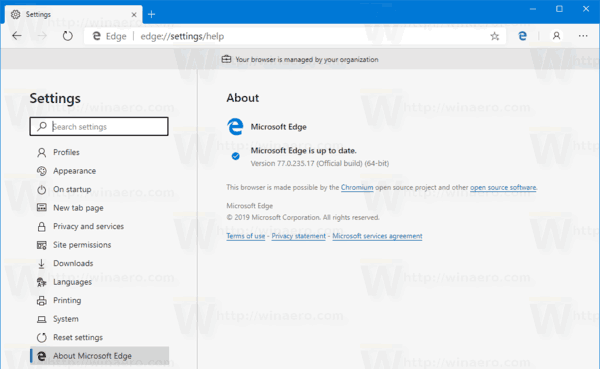 The stable channel of Edge Chromium was first discovered on July 30, 2019. At that moment, the installer was just a stub, which was not able to deliver anything to the end user. This time, it installs version 77.0.235.17.

As you may notice from the screenshot above, this build doesn't have the 'feedback smiley' button in the toolbar. Tip: You can get rid of that button in pre-release versions of Edge Chromium by following the steps here:

The release is built on the Chromium engine version 77, which is a version ahead of the current stable Google Chrome browser. The actual pre-release versions of Edge Chromium at the moment of this writing are as follows: