I have released Winaero Tweaker version 0.19. This release is very special. Besides the addition of new features and bugfixes, it also includes a number of useful user interface improvements. I have tried to sort out a number of long standing annoyances. 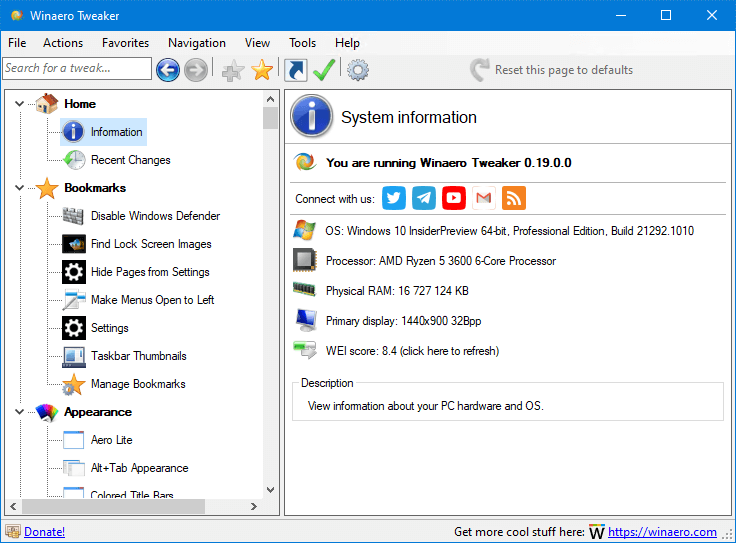 First of all, I am happy to announce that I have finally found what was preventing Winaero Tweaker from exporting 16 tweaks. This issue had been reported several times by users , but I couldn't find the cause. However, it was a surprise for me that it was caused by a bug in Visual Studio. Now it is fixed.

Another bugfix worth mentioning is a fully-functional Settings cascading context menu for the desktop background once again. That was a bug accidentally caused by me.

Also, there are other fixes, but they are really minor.

The user interface of Winaero Tweaker is always subject to improvements. First of all, I have updated the toolbar, so it looks better on HiDPI screens.

Next, I added the corresponding menu entries for all toolbar buttons, and assigned hotkeys to them. From now, you can use keyboard shortcuts and menus for the following actions:

Also, I have re-arranged the existing menu items a little. There is a new "Actions" menu, where you will find all the single tweak-specific actions.

There are plenty of Winaero Tweaker users who always ask for the "navigation history" option in the app. Well, I have implemented it. It looks and works similar to what you have in File Explorer on Windows. It stores a list of tweaks you have visited since the app start, and allows you to go through that list, as follows: 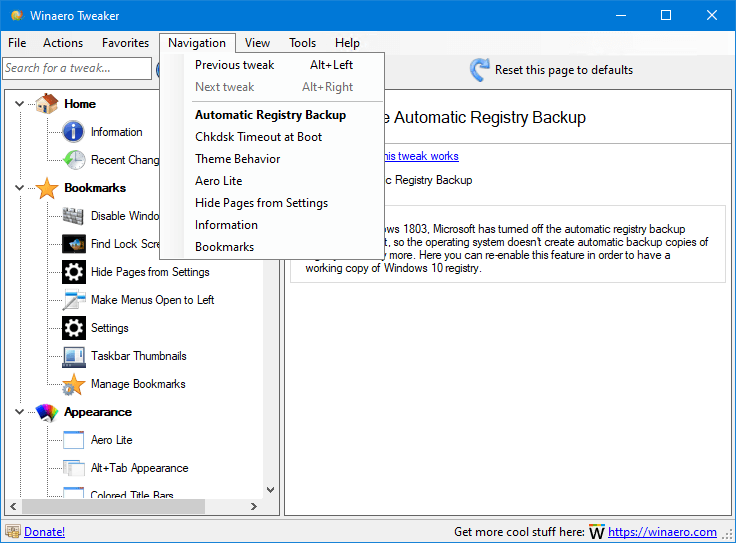 In addition to the navigation history, another thing you may like is recent changes.

The Recent changes option is a new feature of Winaero Tweaker that lists the tweaks you have applied, arranged by the modification time. Now you can recall what and when you have changed at a glance. By double-clicking on its entries, you can directly open the tweak and then revert or re-adjust it. 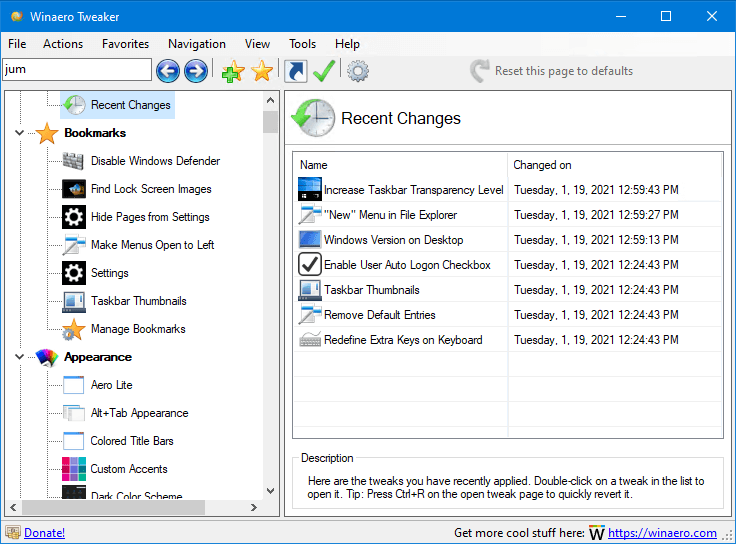 Finally, there is one more minor change. The Information page of Winaero Tweaker now includes Windows edition and its build number.

All the below tweaks are supposed to work in Windows 10, Windows 8.1, Windows 8, and Windows 7.

This option adds the 'change owner' context menu to files, directories, and drives. Using it, you can view the current owner of the file system object, set it to Everyone, System, TrustedInstaller, or Administrators. 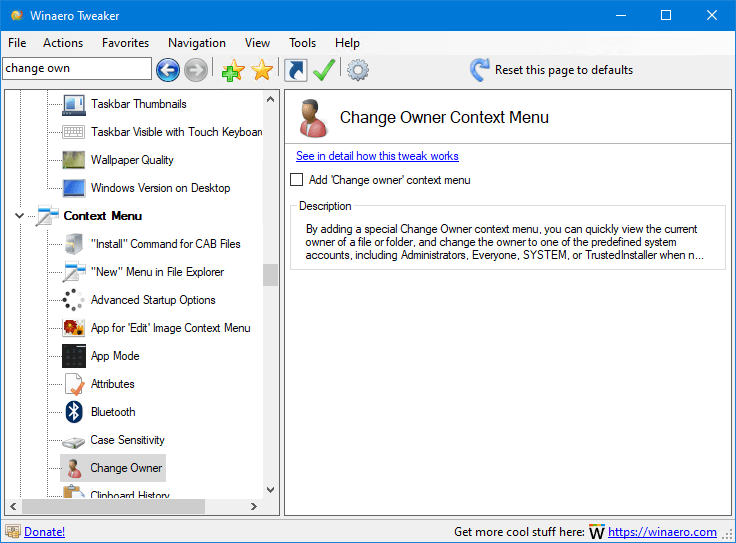 Change the number of Folder Views to remember

All Windows versions allow you to customize a specific folder's view to make it more suitable for the content in that folder. View changes are remembered by File Explorer/Windows Explorer or, all folders can be set globally to the same view via Folder Options. By default, Windows remembers the view options for first 5000 folders. This number can be increased up to 20 000 folders, now with Winaero Tweaker. 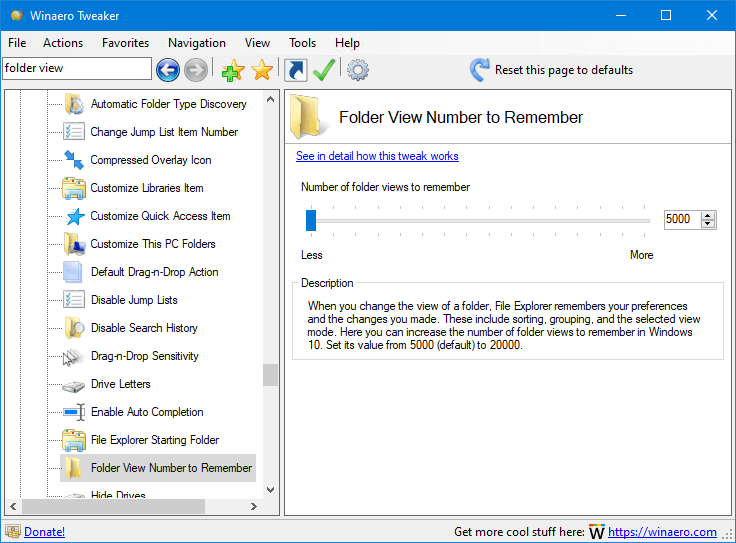 Change the number of items in jump lists

Windows allows you to adjust the number of items visible in the jump list. This number is set to 12 by default. With Winaero Tweaker you can increase or reduce it. 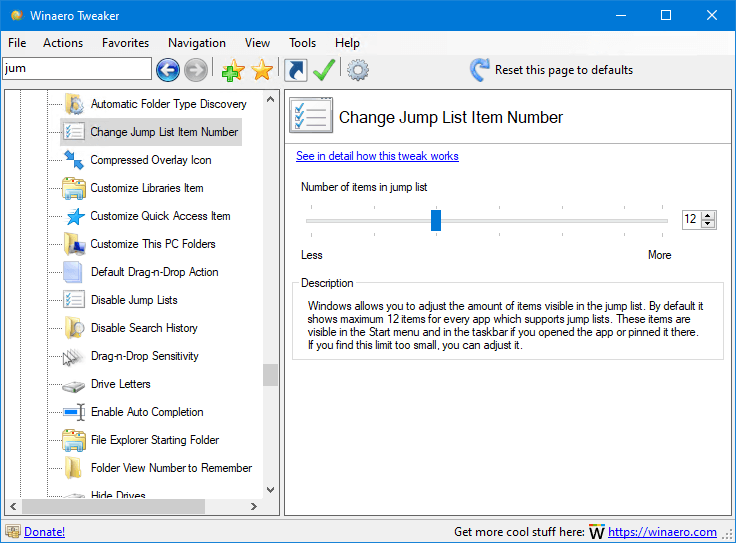 As always, I would like to say BIG THANKS to each and every Winaero Tweaker user. Your support, reports and suggestions are always helpful.