How to Add Change Owner Context Menu in Windows 10

Sometimes you need to get full access to some file or folder in Windows 10. It can be a system file or folder, or one which was created by a user account that no longer exists. In most cases, the Windows operating system will prevent you from doing any operation on such files and folders. In this case, it is very useful to see the current owner and be able to quickly change it.

The concept of ownership was brought to Windows with NTFS. NTFS is the standard file system of the Windows NT operating system family. Starting with Windows NT 4.0 Service Pack 6, it supported the concept of permissions which can be configured to permit or restrict access to files, folders, and other objects locally and over a network.

By default, almost all system files, system folders and even Registry keys in Windows 10 are owned by a special built-in user account called "TrustedInstaller". Other user accounts are set to only read the files.

As a user accesses each file, folder, registry key, printer, or an Active Directory object, the system checks its permissions. It supports inheritance for an object, e.g. files can inherit permissions from their parent folder. Also every object has an Owner which is the user account that can set ownership and change permissions. If you are interested in managing NTFS permissions, refer to the following article: How to take ownership and get full access to files and folders in Windows 10

This post will show you how to add Change Owner to the context menu of files and folders in Windows 10. 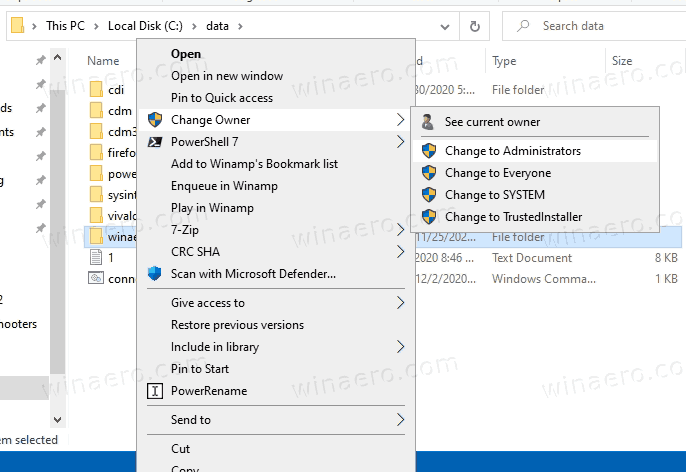 By adding a special Change Owner context menu, you can quickly view the current owner of a file or folder, and change the owner to one of the predefined system accounts, including Administrators, Everyone, SYSTEM, or TrustedInstaller when needed.

The above REG files add a number of entries under the following Registry branches.

Change and view the owner of files and folders

Here's how the context menu entries work for the above context menu. Most commands require to be started as Administrator. The view current owner option doesn't require administrative privileges. All other entries use an elevated PowerShell instance to get their work done.

To view the current owner of a file or folder, the context menu calls the Get-ACL cmdlet. It populates the access control lists (ACLs) for the given files system object. The ACL specifies the permissions that users and user groups have to access the object. This is the only command in the context menu that runs with regular user privileges. The command syntax is

This will print the current owner of a file or folder on a new line.

This command will run elevated (as Administrator). It calls the icacls command to change the file ownership to the built-in system group "Administrators". It exists in Windows 10 by default, so all members of this group will become the "owner" of that file, e.g. they will be able to further manage its permissions. The command for this context menu entry looks as follows.

Change owner to Everyone

The Everyone group is a system group that includes all users that were sucessfully authenticated when they logged on, along with a number of built-in accounts, such as the Guest account, and several other built-in security accounts like SERVICE, LOCAL_SERVICE, NETWORK_SERVICE, and others. To change the owner to Everyone, the following command is used:

The SYSTEM account, also known as LocalSystem, is a special account used by the service control manager. This account is used to run various services in Windows 10. The command is simple:

TrustedInstaller is a special system account that adds an extra protection layer to the critical system areas. Important Registry keys and system files are owned by it. It doesn't appear in the list of user accounts, and you cannot easily select it manually when changing ownership. Its name needs to be explicitly typed manually to set or restore the TrustedInstaller ownership. The following command is used to change the owner to TrustedInstaller.

It is possible to accidentally run these context menu commands on some important system directory or file. This may break the operating system or cause some unexpected behavior. In order to prevent this accident, the Registry files use extended metadata options to filter the commands for critical system objects. The following folders and files are protected, and the context menu won't work on them:

This is implemented by using well-known prop: values, also known as metadata from the Windows Property System that can be set for files, folders and other files system objects. You can get the full list of such values on the following MSDN page:

This ensures that you won't break the OS.

There is a Registry file named Add Shift Click Change Owner To Context Menu.reg. It makes the context menu only appear when you press and hold the Shift key while performing a right click on a file, folder, or drive. This can be useful to users who prefer to keep the File Explorer context menu clean and not cluttered. This option allows using the Change owner context menu on demand.