Windows 10, Windows 8.1 and Windows 8 come with Client Hyper-V so you can run a supported guest operating system inside a Virtual Machine. Hyper-V is Microsoft's native hypervisor for Windows. It was originally developed for Windows Server 2008 and then ported to Windows client OS. It has improved over time and is present in the latest Windows 10 release as well. Today, we will see how to create a shortcut to directly establish a connection to a Hyper-V VM in Windows 10.

The shortcut will open the Hyper-V Virtual Machine Connection dialog. There, you will be able to specify a Hyper-V host and a virtual machine name you want to connect. 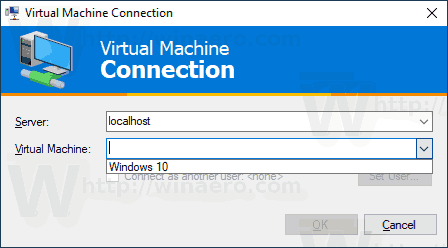 Alternatively, you can modify the shortcut target, or create a new shortcut that will allow you to directly establish a new connection to the specific virtual machine on the specific Hyper-V host.

The next command will open a new connection to the Windows 10 virtual machine running on the local host.

Now, you can change the shortcut icon, move this shortcut to any convenient location, pin it to taskbar or to Start, add to All apps or add to Quick Launch (see how to enable Quick Launch). You can also assign a global hotkey to your shortcut.