Microsoft today released the Windows Subsystem for Linux (WSL) as a preview version for Windows 11 to the Microsoft Store. By installing it from the Store you will receive new versions automatically, get new features faster and independently from your host Windows version.

The released package doesn't include a single change or improvement made to the WSL itself. Instead, all the changes have been done to how the company redistributes WSL. I.e. it is all about packaging and updating from the Store. 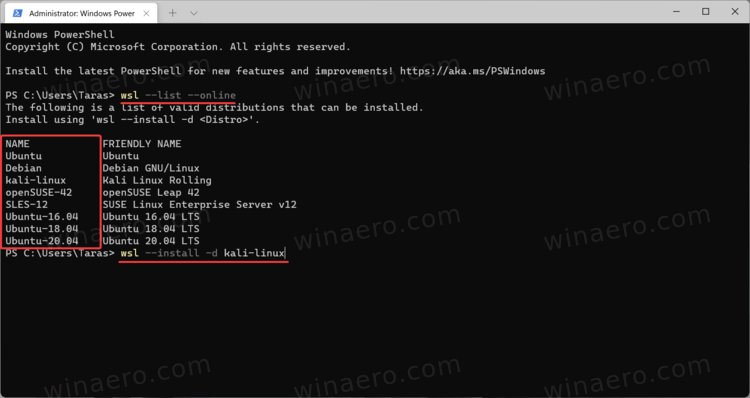 By making WSL a store app, Microsoft moves it out of optional components. They no longer be part of the operating system. Instead, the WSL is now an independent Store app, i.e. an external set of binaries for Windows. The Store app update mechanism will deliver most recent updates right to your machine once Microsoft will publish them to the Store.

There will be no need to wait for a newer feature update or cumulative patch to get features like GUI app support, GPU compute, and Linux file system drive mounting. They will soon reach the production version of WSL, and you'll get them instantly.

There is another benefit from having WSL as a Store app. It can coexist with your current WSL version, so you have two of them simultaneously and switch between them on demand.

How to install WSL from Microsoft Store

The WSL Store package can handle both WSL1 and WSL2 versions of Linux images. Finally, you can uninstall and remove it at any moment later from Settings (Win + I) > Apps > Apps and features, like any other app. You can also right-click its icon in the Start menu and select Uninstall from the context menu.

Microsoft says they will are going to focus on the Store package, but it is up to users to device whether they need a built-in WSL component on Windows or not. The company is collecting users' feedback, so there is a chance that both packages will continue to remain available in the future.