This fall, Microsoft is releasing a successor to the original Windows 11 version. The release is known for long as "version 22H2". Now, an updated "Get Started" app reveals what can become the marketing name of the upcoming release.

Traditionally for recent Windows updates, they have a version number and a user friendly name. For example, the initial Windows 10 version was simply "Windows 10", but then we have seen "Creators Update", Fall Creators Update, May 2020 Update, and so on.

Similarly, Windows 11 "gold" release didn't come with any marketing name as a new products at its time. In order to differentiate its successors, the upcoming "22H2" release will get an easy to remember name.

The latest version of the built-in Get Started app shows that marketing name as Windows 11 2022 Update. While it wasn't officially announced or confirmed, it will most likely be like that. The text in the app reads the following.

You're now running the Windows 11 2022 Update! Read on to discover new features and set things up just how you like. 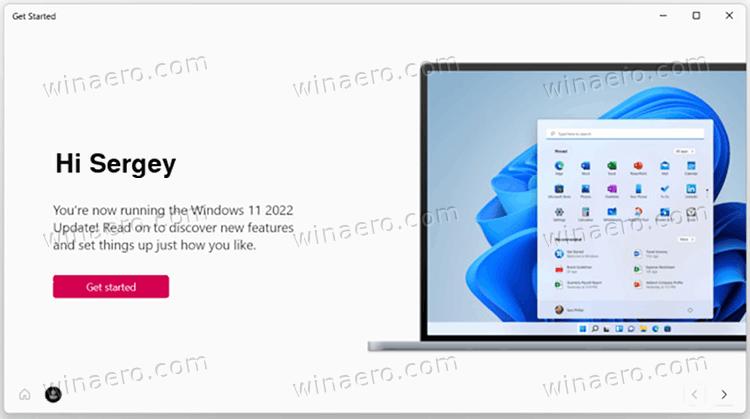 The new name fits the scheme Microsoft chose for the recent releases of Windows 10, so it is not surprising.

Rumors say that Microsoft will release Windows 11 version 22H2 on September 20, 2022. While Microsoft didn't confirm this date yet, it matches the current OS release schedule.

See our detailed change log that covers each and every change in Windows 11 version 22H2:

After version 22H2 the company plans to go back to a more traditional release cycle with one "big" major release once in three years. Windows 11 version 23H2 has been reportedly canceled. They will also change the new feature delivery mechanism to "Moments", so what they will reach users in waves.