Microsoft Edge on desktop has a built-in screenshot tool called Web Capture. Although Windows 10 has plenty of tools to create screenshots, Web Capture offers a unique option to create a long screenshot of the entire page. Now Microsoft wants to bring the same utility to mobile platforms.

In the latest update to Edge Canary on Android, Microsoft added a new screenshot option. It is available in the browser's share menu next to "copy link," "QR code," and "Print" options. At the time of writing this article, it is hard to say that this utility is identical to Web Capture on desktop. In fact, it is pretty basic, does not support full-page screenshots, and even has some broken controls. All it does is create a single screen screenshot with options to delete, save, or share it. There is also the edit button, but it is currently broken and does nothing. 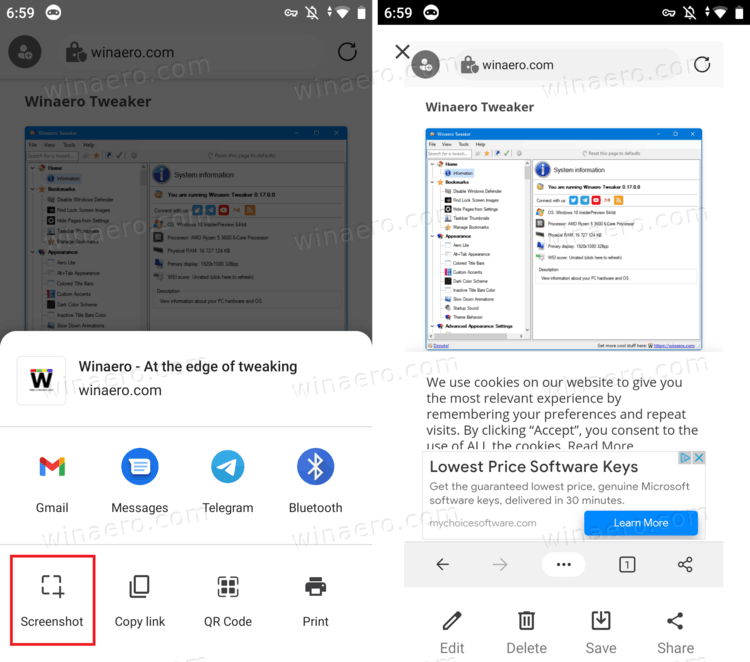 It is worth mentioning that you should not blame Microsoft for shipping half-baked and half-broken options to its browser. The Canary channel is a test field for developers to try new features before pushing them to more stable preview branches and, eventually, to the stable release. It may take quite a while, sometimes many months, before a new feature in Edge Canary becomes usable and stable enough for the public version.

You can download Edge Canary for Android from the Google Play Store. If you want to test new features in Edge for Android, but you do not want to deal with half-finished capabilities or bugs, Microsoft now offers a more stable release from the Dev channel. Also, the company will soon bring the Beta channel to Android. The latter is now available on iOS to a limited set of users.

All these preview versions are a part of Microsoft's effort to unify Edge's codebase across all platforms. Now, Edge for Android and iOS follows the same version as their desktop counterparts.