By default, Internet Explorer stores website addresses that you have visited in the past like all browsers. This is called the 'browsing history'. Depending on IE's AutoComplete settings, it may include web forms data you entered on various sites, passwords, cookies and local site preferences and the cache. However, if you need to share your Windows account with other users, you might want to clear the browsing history in Internet Explorer. Here's how to clear it.

In the latest release of Internet Explorer 11, as the recent leaks show, there is a compatibility feature called Enterprise Mode. Using Enterprise Mode, corporate users will be able to extend the compatibility view feature with their own customized settings. Let's see how we can activate it in the recently leaked Windows 8.1 Update 1 build.

As you may be knowing, 64-bit editions of Windows include 32-bit Internet Explorer as well as a 64-bit version. This has been the case since Windows XP Professional x64 Edition and the reason that both editions are included is for compatibility with addons. When 64-bit IE was first introduced, most addons like Flash Player, Java, and most ActiveX controls were 32-bit only. 32-bit addons cannot work with 64-bit IE, that's why Microsoft bundled both x86 and x64 IE versions. Users could easily open whichever IE they wanted but this changed with Internet Explorer 10. Let us see how.

If you are a user of Internet Explorer, one day it can surprise you and stop working. A friend of mine called me today and complained that his Internet Explorer browser was not opening in Windows 8.1 from the taskbar as well as the Start Screen. Thankfully, we were able to resolve the issue. Here is what we did.

In modern versions of Internet Explorer, IE11/IE10/IE9, you get a useful New Tab page, which has tiles for frequently visited websites. By right clicking the tile or by pressing the little cross button (x) in the top right corner of each tile, you are able to remove that particular site from the list of thumbnails. But, for some reason, once you hide a specific website, there is no interface to restore it. What if you have deleted some site accidentally? Or maybe you removed it previously but prefer to have the site listed in the Frequent section again? 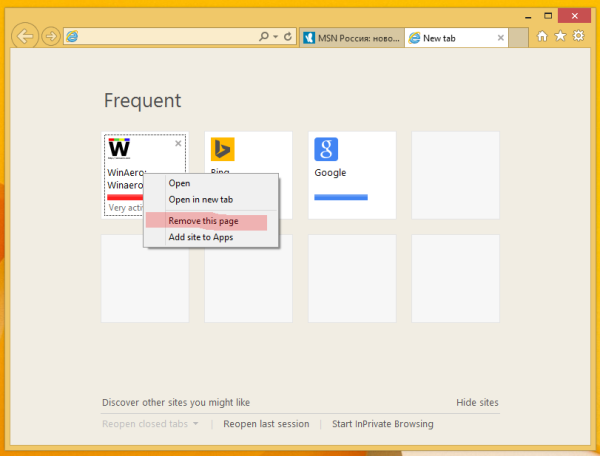 In this article, I will share with you a simple trick which will allow you to restore removed sites.

When I tried Internet Explorer 11, I was slightly surprised that it still has a fixed number of thumbnail rows on the New Tab page. I am of the opinion that the number of rows should be dynamic and must depend on the current display resolution and browser window size. However, the number of thumbnails for frequently visited websites on the New Tab page in IE11 is still strictly limited to two rows! In this tutorial, we will look how to increase the number of rows and make the new tab page of the browser more useful.

Starting with Internet Explorer 8, a compatibility view feature was shipped by Microsoft in Internet Explorer to help users deal with web page rendering issues. It was implemented as a button on the address bar. When pressed, it could quickly turn an IE8+ incompatible site to render properly in the current version of Internet Explorer as it switched to the older compatible mode of rendering the same web page at the cost of disabling the new standards supported in edge mode. In the screenshot below, you can see that button in IE10:

In Internet Explorer 11, the compatibility view button is removed from the address bar because document modes are now deprecated. Microsoft felt that the button had outlived his purpose because it's been many years now since Microsoft introduced X-UA-Compatible tags. Web developers were supposed to add these X-UA-Compatible meta tags to their website's HTML header to indicate web page compatibility and not leave it to the user to depend on the button to correctly render the page. Now, Microsoft is expecting all web developers to update their websites to work with the latest edge mode and avoid using document modes, unless on a temporary basis. However, what if some sites still don't render properly? Are you, the user stuck with the loss of this feature and be penalized for the developer not having updated his website? No, in fact, the compatibility view feature still remains in the browser. Here is how you can turn it on or off.

Today, many users faced a problem with Google search when using Internet Explorer 11. The search results appear completely broken and aligned to the left in a narrow column. Luckily, we have figured out what is the cause of the issue and how to fix it!