As you may already know, Microsoft is developing a new Skype version for the Linux OS. Unlike previous 4.x versions of Skype, which are considered classic, the new app is Electron-based and comes with its own Chromium engine. Essentially, it is a wrapper for the web version of Skype, with some enhancements. If you have a 5 year-old CPU made by AMD, you may run into an issue that recent versions of Skype won't start at all. 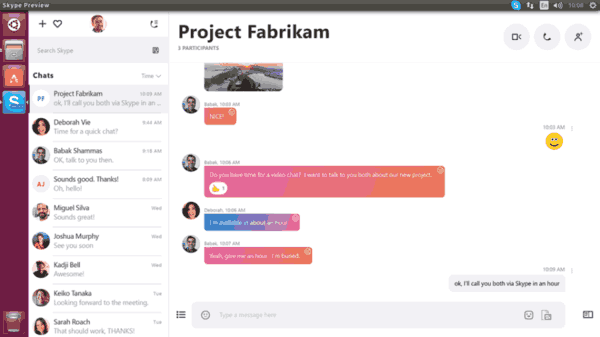 This problem has been identified by Skype users on Linux. They have tried to debug the main executable with gdb (the debugger app available on Linux) and have figured out that a new system requirement has been silently changed in Skype. The SSSE3 CPU instruction set support is mandatory now for AMD CPU owners. If your CPU doesn't support it, the Skype app will silently exit with no warning or message.

When started on Linux, Skype creates three child processes. One of them is responsible for UI rendering. If SSSE3 is missing, it will exit quickly, so the whole app will stop working.

Skype is trying to utilize the pshufb function which is missing when your CPU doesn't support the SSSE3 instruction set.

Some users point out that Microsoft could easily fix the issue by adding the option -mno-ssse3 to the compiler. However, it took 2 months for developers to figure out the problem and give a proper response. The answer came from Microsoft's forums:

- Could you please check if you have a processor without SSSE3 instruction set support? (mostly 5+ year old AMDs).
- If that is the case, the system is unfortunately unsupported by Skype. In any other case, please provide us more details, so we can investigate your issue further.
...
An Intel Pentium 4 processor or later that's SSE2 and SSSE3 capable

This is a bad surprise for sure. It is not known what made Microsoft leave a huge part of AMD users without Skype but the new Microsoft does not support older products for long. Interestingly, the beta version of Skype for Linux continues to work for now, so they can use it for a short while. It's obvious that the solution is not permanent. Sooner or later, it will stop working as well.