Several months ago, Microsoft announced its plans to introduce a 64-bit version of the OneDrive sync client for Windows. This is a default app that comes preinstalled with every consumer-based Windows 10 SKU. Since the very first release, the OneDrive sync app for Windows has been available as a 32-bit app. After many years, Microsoft is finally ready to upgrade the program to a 64-bit platform.

Currently, the 64-bit OneDrive app is available as a public preview version. You can download and install it on any modern computer with 64-bit Windows. Do note that this does not apply to Windows on ARM. If you own a Windows PC with an ARM processor, you still need to use the old 32-bit version. Also, the 32-bit version remains the only choice for those running 32-bit Windows.

Microsoft notes that 64-bit Windows users are free to choose either of the two versions. Considering that the 64-bit OneDrive app for Windows is still in the preview stage, Microsoft recommends rolling back to the original version if users encounter any troubles or bugs.

Upgrading the OneDrive app from 32-bit to 64-bit significantly improves the program's performance with large files. Also, you will notice some uplift if you store lots of files in OneDrive.

Microsoft published a new page with a brief explanation of how to choose between the 64-bit and 32-bit versions of OneDrive on the official website. Also, you can see if an app is 32-bit or 64-bit in Task Manager before upgrading the app.

👉To install the 64-bit OneDrive app for Windows, click this link.

After downloading the executable file, open it and wait for the system to complete the installation. Windows will replace the old 32-bit app with the new 64-bit version. After installing the app, right-click the OneDrive icon and select Settings > About. 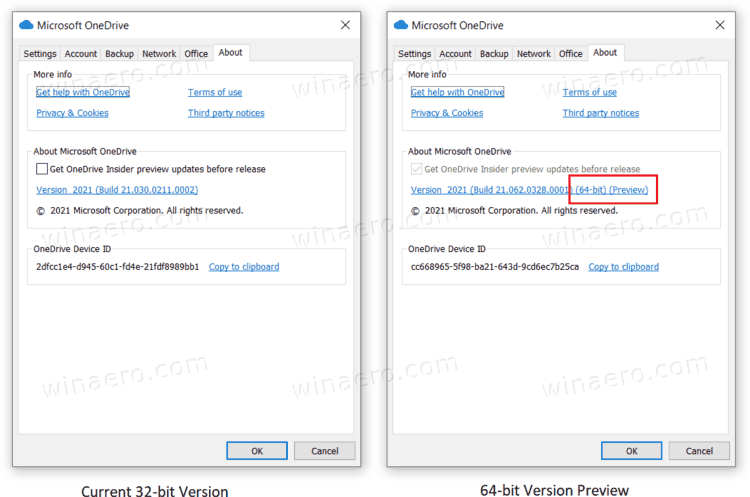 Do note that installing a preview version of OneDrive automatically enrolls you into the OneDrive Insider program. If you are not comfortable with using pre-release software, wait for Microsoft to release a stable 64-bit version soon.