Microsoft haven't yet done with new features for Xbox this month. After releasing the March firmware update for Xbox One and Xbox Series, the company announced a major improvement to Microsoft Store on consoles. Now, users can check a list of supported languages for different games in the Microsoft Store for Xbox and the Xbox Game Pass app.

If English is not your primary language and you want to know whether a title supports different languages, there is a new “Supported Language” section in each store listing. It allows you to quickly check which languages are supported in the game's interface, audio, or subtitles. Microsoft Store shows this information for 27 different languages. If a game supports the language you need, you will see green checkmarks next to it. Anyway, your default language will always be on top of the list, so you can quickly find it without scrolling. 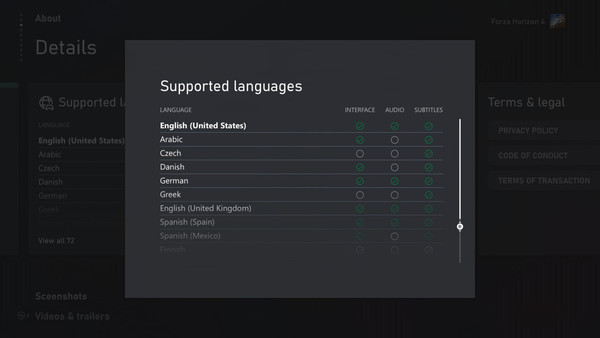 Do note that the “Supported Language” section is not available for certain games. Microsoft says it has already added localization tags for “hundreds of games.” Many other titles will follow suit.

It is nice to see that Microsoft is finally following good practices established long ago in other games stores. A list of supported languages has been available in Steam and Microsoft Store for Windows 10 for many years. With this update, it is finally available to console gamers.

Microsoft says this is not the only accessibility improvement coming to Xbox. Later this year, the company is going to introduce “even more updates to make it easier to find and play games that are right for you.” You can read more about the Microsoft Store update for Xbox in the official Xbox blog. Also, here is a link to the official announcement with all the details about the March Xbox update.