Microsoft has revealed which features the company has added to OneDrive, its cloud storage and sync service. The announcement mentions the roadmap entries implemented in December, as well as a few changes made to online Office apps.

Windows users must be familiar with OneDrive. It is a preinstalled cloud sync client app, that works using your Microsoft Account to sync your files between devices you own.

OneDrive is the online document storage solution created by Microsoft which comes bundled as a free service with Windows 10. It can be used to store your documents and other data online in the cloud. It also offers synchronization of stored data across all your devices.

OneDrive is bundled with Windows since Windows 8. It is the all-in-one solution built by Microsoft to provide the user the ability to have the same files on every PC he signs in with using his Microsoft Account. Previously known as SkyDrive, the service got rebranded some time ago.

It also offers synchronization of stored data across all your devices. "Files on-demand" is a feature of OneDrive which can display placeholder versions of online files in your local OneDrive directory even if they were not synchronized and downloaded. The synchronization feature in OneDrive relies on Microsoft Account. To use OneDrive, you have to create one first. Besides OneDrive, Microsoft Account can be used to log in to Windows 10, Office 365 and most online Microsoft services.

When you have OneDrive installed and running in Windows 10, it adds a Move to OneDrive context menu command available for files under certain locations included in your user profile like Desktop, Documents, Downloads, etc.

For the files you store in the OneDrive folder, you can use the file history feature. 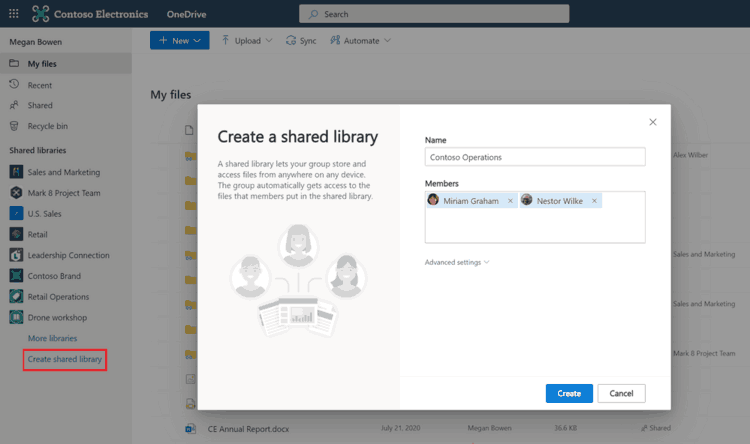 The new Shared Libraries in OneDrive on the web is a new feature that makes it simpler and easier to create collaborative spaces. It is powered by an Office 365 group and allows the user to select participants with whom to share your team files.

One of the best features that has landed in OneDrive this December is the ability to exclude specific files from sync. Admins can configure a file name template or file type that the OneDrive should not sync automatically. No errors appear for the skipped files, and the files remain in the local OneDrive folder.

So now as a part of "Known Folder Move" if you need to move a Desktop folder which might consist multiple shortcut files , just add .lnk files to the list of the excluded files and prevent them from syncing.

End users will be notified about the exclusion in the activity center.

The also will be able to recognize these files with "do not enter" status in the File Explorer. There is a special overlay icon for that.

The new option is part of the admx/adml files that ship with OneDrive version 20.201. It is also documented here.