It did not take too long for Microsoft to release a native Apple M1 version of the Edge browser. If you try to install the stable version of Microsoft Edge on your new MacBook Air, MacBook Pro, or Mac mini, the installer will prompt you to choose between the “Mac with Intel chip” and “Mac with Apple chip”. 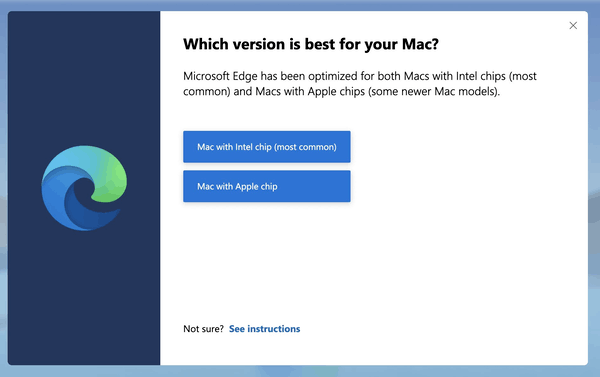 Being a native app for MacBooks with an ARM processor means Edge does not need to run its code through an emulation layer anymore. This significantly improves performance and efficiency, making the browser much easier and more enjoyable to use.

With the latest release of Edge for M1, Microsoft’s browser joins the list of M1-optimized apps for macOS. It includes Chrome, Office apps from Microsoft, popular photo editing software from Affinity, and many more. First adopters report that Microsoft Edge for M1-based Macs works just as well as any other optimized browser. You can download Edge for macOS from the official website.

Currently, Microsoft Edge supports most modern platforms. It is available on Windows 10 (including ARM), 8.1, 8, 7, macOS (now including ARM), iOS, Android, and Linux. Just be aware that the latter is still in its infancy and there is currently no stable version available. As to classic Edge Legacy, it is on the way out of Windows 10.

You can the stable app version here:

For pre-release versions, Microsoft is currently using three channels to deliver updates to Edge Insiders. The Canary channel receives updates daily (except Saturday and Sunday), the Dev channel is getting updates weekly, and the Beta channel is updated every 6 weeks.

The app can be downloaded from the website for Insiders.