Here you can download Windows 7 Games for Windows 11. You will get Solitaire, Spider Solitaire, Minesweeper, FreeCell, Hearts and the rest of the classic card and board games of the set. The games will continue working where you left off.


Starting in Windows 8, Microsoft no longer ships classic games with the OS. Instead, it offers you a Store version of the games. The new games include ads, have worse performance, and come with a different gameplay. Many users are not happy with that change. This is where the classic Windows 7 Games package comes into play. 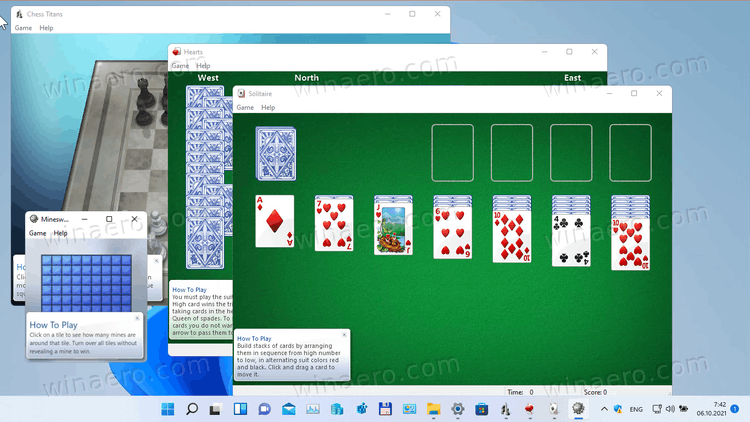 The game package has reached version 3, and now it is fully compatible with Windows 11, Windows 10, Windows 8.1 and Windows 8. Besides the games itself, it also received a number of improvements for Windows 11. The installer now supports High DPI and doesn't look blurry any longer. The non-working Game Explorer no longer appears in the Windows 11 Start menu. The Internet Games are now optional and not checked by default.

Get Windows 7 Games for Windows 11

Tip: You can verify the downloaded file. The exe installer has the following checksums:

To check it, open Windows Terminal by pressing Win + X on the keyboard and selecting Windows Terminal. If needed, switch to the PowerShell profile. Then type the following command.

The default run will calculate the SHA256 sum. To verify the MD5 checksum, execute the command:

You can save your time by adding the file hash context menu to File Explorer.

Now, let's see how to launch the games after you have installed them.

You are done! Play your favorite games now.

The Windows 7 Games package is compatible with all builds of Windows Windows 11, Windows 10, Windows 8.1 and Windows 8. The list of available games includes.

There are also Internet Games, Internet Spades, Internet Checkers and Internet Backgammon. Unfortunately, Microsoft has turned off the game servers for them, so they no longer connect to them out of the box. That's why they are unchecked by default in the installer.

The games included in this package come with a full set of language resources. The installer is able to determine which languages you have installed in your OS, and extract only the required resources to save your disk spaces and don't fill it with redundant files.

So, thanks to the above optimization, the games will always run in your native language, matching the current locale of your Windows version. The following languages are supported.

The installer supports the /S switch, so it will install the games automatically without user interaction. The S letter must be capitalized, it is a mandatory requirement.

Run it as follows from a batch file or from any console.

If you are using PowerShell, you may need to enter the full path to the binary or prepend it with the ./ path portion, like this:

After that, the games will be silently installed and registered in Windows 11.

If you have upgraded from a previous Windows version, or you have installed a newer build of Windows 11 over the older one, the games will stop working. You'll have to reinstall them. Simply reinstall the package. Do it as follows.

I recommend you to remove the Windows 7 games before you installing a new build of Windows 11. Once you upgrade the OS, install them again and continue to play. They will preserve your stats and scores.