Windows 11 allows to find apps by the first letter, that is also known as Start Menu alphabet navigation. That's an easy and convenient option to quickly locate and run the installed app.

When Microsoft launched the first Windows Phone 7 version, the company introduced a novel way to find installed apps. When the list of apps gets to a specific size, the operating system starts displaying alphabet letters that allow you quickly jump to the program you need without typing its name into the search. Tapping a letter reveals the alphabet for navigation, then tapping another letter gets you to the programs whose names begin with that letter. For example, if you need to get to the YouTube app, you press Y on the alphabet.

Windows 11 always shows the letters for quick navigation, no matter how few or many apps you have installed. Also, note that the same idea works in Windows 10. As of now, the only difference is that the Start menu has a different UI in Windows 10. 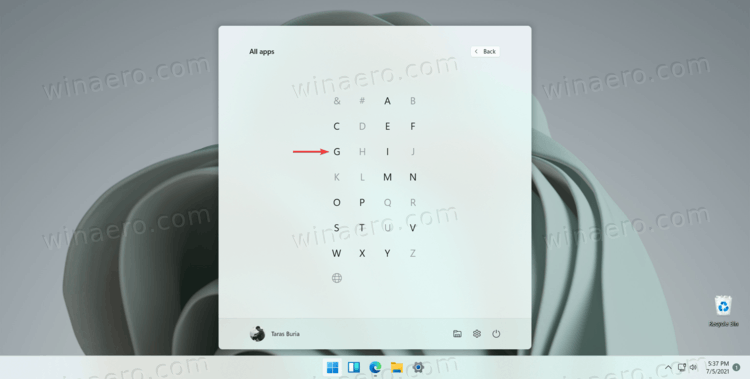 Note: If a letter appears inactive (grayed out,) it means that you do not have applications whose names start with this letter.

Navigating the list of installed apps in Windows 11 can save you a lot of scrolling with your mouse or finger, especially on a computer with a touch screen. Alternatively, you can also use Windows search to find the app you need. Just open the Start menu and start typing what you try to find.