CCleaner is a popular tool that needs no introduction. Many users —especially less tech-proficient—find CCleaner helpful in maintaining a computer in a working state. If you are a CCleaner user, there is good news for you: CCleaner is now available in the Microsoft Store.

CCleaner is a popular utility for optimizing Windows. Developers claim it "injects instant speed into your machine," clears out errors, and fixes broken settings to improve stability. You can also utilize CCleaner to update drivers, uninstall applications, protect privacy, etc. The app is free, but users can get extra features by purchasing CCleaner Professional.

Microsoft was previously flagging CCleaner as a potentially unwanted app (most likely because it can download additional software, such as Google Chrome), but now installing CCleaner does not trigger the default Windows antivirus.

CCleaner in the Microsoft Store was made possible by the new policies Microsoft introduced last year. Developers can publish unpackaged apps and use their content delivery systems. After installing CCleaner, the app will be updating itself outside the Microsoft Store. The only change here is that users can download CCleaner without navigating to the app's official website.

Unfortunately, we cannot provide you with a link to CCleaner in the Microsoft Store because the latter lacks the required option. Microsoft, for some reason, does not allow sharing apps developers maintain outside the Store. Also, there are no links on CCleaner's official website (probably for the same reason). 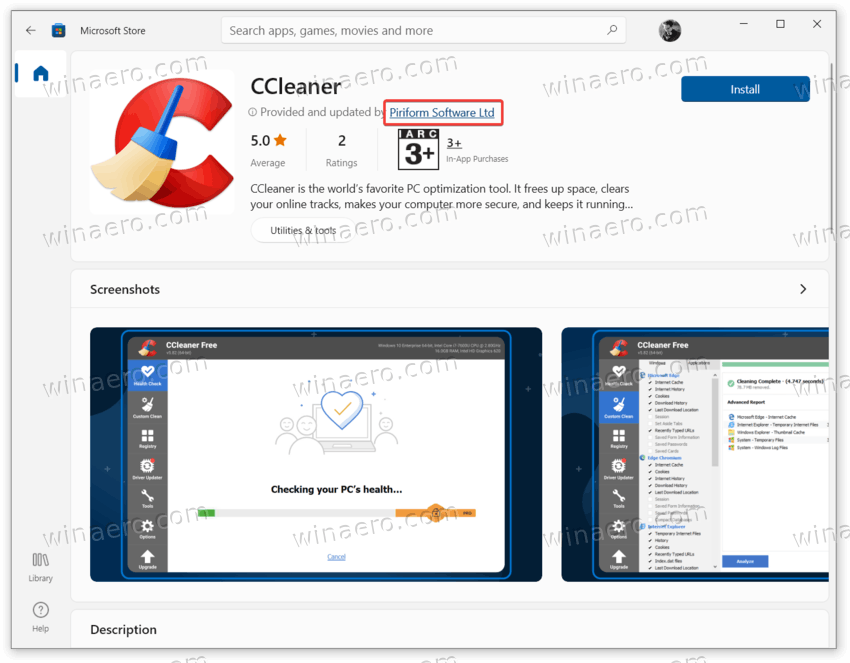 Microsoft wants to make its storefront more accessible and safer, yet such a simple defect puts users at risk of downloading scammy apps. The legit version of CCleaner in the Microsoft store is published under the "Piriform Software LTD" name, so be sure to check it before downloading.