The new Microsoft Store will go live in preview alongside the first public builds of Windows 11 next week, with a scheduled launch somewhere this fall for both Windows 11 and Windows 10. 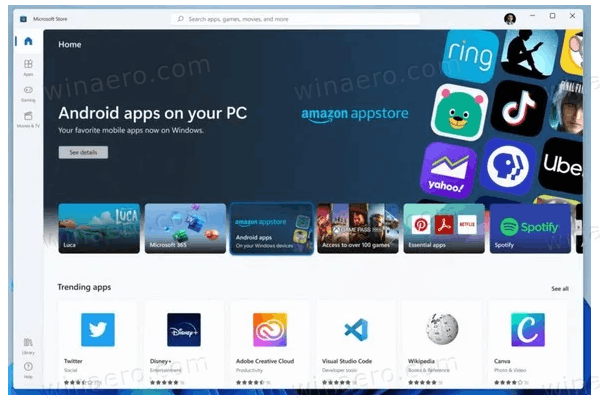 For starters, the new Microsoft Store will come with lots of curated content. Similar to what Apple did to its stores, Microsoft is now bringing collections and, ahem, stories to the Store. The idea behind that is to guide users to high-quality apps and games, improve discoverability and engagement.

The next one is huge. With Windows 11, the operating system from Microsoft can run Android apps. We currently do not know whether users will have the ability to sideload apk-files or install third-party marketplaces. Microsoft so far confirmed that the Windows 11 Store will get a dedicated Android apps section powered by Amazon Appstore.

Microsoft also wants to make installing apps from a browser easier. When you click an app's Microsoft Store badge, Windows 11 will open a small popup with a button to quickly install the app without launching the Microsoft Store in a separate window. The popup will also provide some additional information: average user rating, age rating, a brief description, and a link to open the Microsoft Store.

As for developers, they will get more freedom and options to choose. The Microsoft Store will get support for unpackaged msi and exe apps. Also, developers will be free to utilize their own content delivery networks and payment systems. Microsoft says it will not take a commission from payments made using third-party commerce systems in apps published in the Microsoft Store. At the same time, developers remain free to use Microsoft's commerce systems with regular fees.

The new Microsoft Store already looks appealing and promising for developers and regular users. Those changes helped Microsoft to snatch some major developers to publish their apps in the Microsoft Store. For example, the new Store will host apps, such as Adobe Creative Cloud and Zoom, with more to come. While new rules may look significantly relaxed and "less secure," Microsoft promises to keep its marketplace secure and trusted.