If you have a BitLocker encrypted USB stick connected to a computer that you are accessing over the Remote Desktop (RDP), you will see the "Access Denied" message once you try to unlock the drive. These are security defaults in Windows 10 which limit access to encrypted drives. Here is how to configure the OS to open such encrypted removable drives.

BitLocker was first introduced in Windows Vista and still exists in Windows 10. It was implemented exclusively for Windows and has no official support in alternative operating systems. BitLocker can utilize your PC's Trusted Platform Module (TPM) to store its encryption key secrets. In modern versions of Windows such as Windows 8.1 and Windows 10, BitLocker supports hardware-accelerated encryption if certain requirements are met (the drive has to support it, Secure Boot must be on and many other requirements). Without hardware encryption, BitLocker switches to software-based encryption so there is a dip in your drive's performance. BitLocker in Windows 10 supports a number of encryption methods, and supports changing a cipher strength. 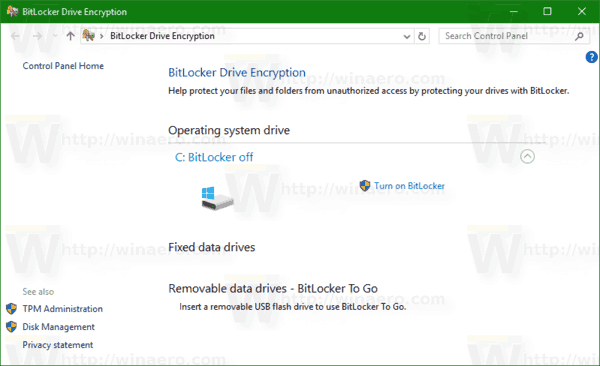 Note: In Windows 10, BitLocker Drive Encryption is only available in the Pro, Enterprise, and Education editions. BitLocker can encrypt the system drive (the drive Windows is installed on), and internal hard drives. The BitLocker To Go feature allows protecting files stored on a removable drives, such as a USB flash drive.

Here's how to do the same with a Registry tweak.