Since its very first version, Windows NT has allowed the user to launch apps with different permissions and credentials than the current user. Using it, you can start a batch file, an executable file or even an app installer as another user. In this article, will see how to add the Run as command to the context menu of your Start menu items in Windows 10.

I've reviewed them in detail in the following article:

In Windows XP, Vista and 7, you had the ability to launch an app as a different user directly from the Start menu. In Windows 10, the Start menu is completely different. It has nothing common with the its previous implementations. It is a Universal Windows Platform (UWP) app which combines the list of installed apps with Live Tiles and shortcuts pinned to the right pane. Unfortunately, it doesn't include the Run as context menu command any more.

For your convenience, you might want to add it. This is possible with a simple Registry tweak.

To add the Run As command to Start Menu in Windows 10, do the following.

The described Registry tweak will enable the command Run as different user for apps in the Start menu in Windows 10, as shown below. 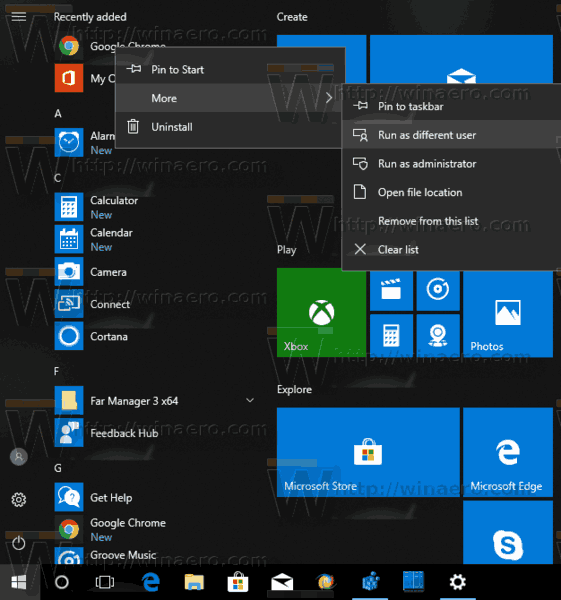 The command will be enabled for all user accounts.

Note: Even if you are running 64-bit Windows you must still create a 32-bit DWORD value. Tip: You can go to a Registry key with one click.

It is possible to enable the Run as different user command for individual user accounts. Here is how it can be done.

Tip: You can switch between HKCU and HKLM in Windows 10 Registry Editor quickly.

Note: If you don't have theHKEY_CURRENT_USER\Software\Policies\Microsoft\Windows\Explorer key, then just create it.

Finally, if you are running a Windows 10 edition which includes the Local Group Policy editor app, you can activate the Run as different user context menu command in the Start menu using the GUI. Local Group Policy Editor is only available in the Windows 10 Pro, Enterprise, and Education editions.

Use Winaero Tweaker to save your time

To save your time, you can use the Winaero Tweaker app. It allows adding the Run as a different user command to both the Start menu and the context menu. 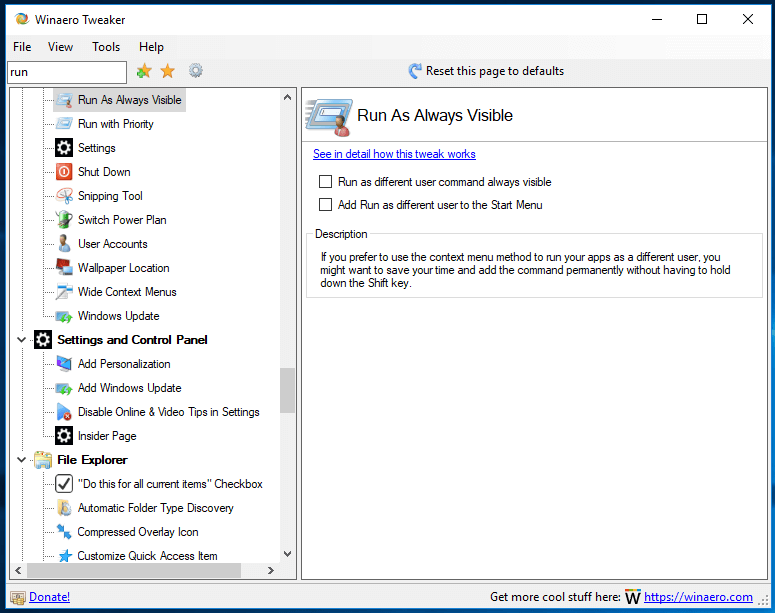