To appease bewildered and seriously offended desktop users, Microsoft added a Win+X menu in Windows 8 (also called the Power users menu) as a compromise for the lost Start Menu. The Win+X menu appears when you right click the bottom-left hot corner of the screen. This menu is useful but it is far from being a replacement for the full-featured Start Menu. Winaero's Win+X Menu Editor lets you customize this menu to your liking if you don't want to use a Start Menu replacement.

In Windows 8.1, Microsoft added a few more items to the Win+X menu and it now appears when you right click the Start button. One of the additions is the Shutdown sub-menu. People often complained, and rightfully so, that it requires too many mouse clicks to shut down Windows 8. We even covered previously all the various ways to shut down Windows. However, one of the flaws in Windows 8.1 is that if you use the Win+X menu to shut down, Windows 8.1 always does a full shut down, meaning you lose the benefits of fast startup, even if it is turned on in Power Options! This is a rather strange and incorrect design decision by Microsoft.

On the contrary, if you shut down using the Settings charm (Win+I), it still does a hybrid Shut down as expected and if you hold down the Shift key on your keyboard while clicking "Shut down" in the Settings Charm, only then it does a full Shut down.

The Shut down behavior with Start Menu replacements like Classic Shell is also correct. When you click Shut down without holding down Shift, it does a hybrid Shut down. When you hold down Shift and then click Shut Down without letting go of Shift, then Classic Shell's Start Menu does a full shutdown. Only the Start button's Win+X menu seems to be flawed and regardless of Shift, it always does a full shutdown. 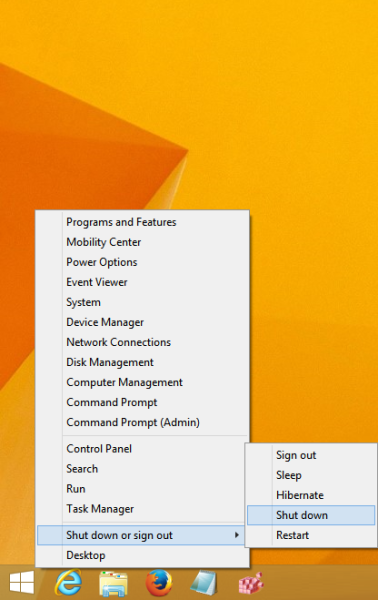 If you use this to shut down, Windows 8 will take longer to boot

So if you want your PC to boot faster, avoid using the Win+X menu (Start button's right click menu) to shut down! Use a proper Start Menu replacement like Classic Shell or use other ways such as Win+I or Alt+F4 on the Desktop to shut down.

Bonus tip: You may also want to look at the various ways to speed up your PC startup. Also, here is how you can reduce the startup delay for desktop apps.