The Windows 11 operating system comes with an updated Microsoft Store app that comes with a new user interface. It is also well-optimized for performance and usability than the previous implementation of the Store. Among the officially announced changes, there is one thing which wasn't yet announced - Compact Mode.

The new Microsoft Store can open as a pop-up with a compact version of the app page. The mini app window displays only basic information about the target product. There's also a button to install or launch it. 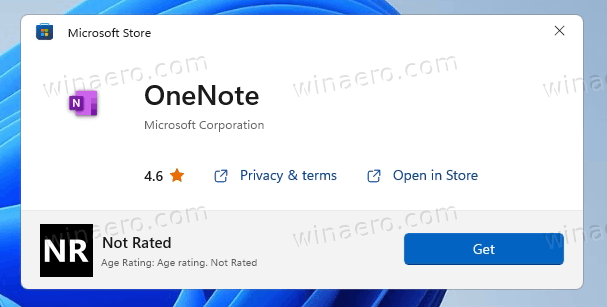 According to the official docs, the feature is available starting October 2021. To open a product page in the Microsoft Store mini window, use the following syntax:

In the app URI above, substitute the 9WZDNCRFHVJL portion with the actual software ID that you want to open. Then, press Win + R to open the Run dialog, and paste the command. Once you hit the Enter key, it will open a new mini window with the app you have specificied.

The new feature is great for directing web users to the Store to quickly install Windows apps, themes and other content.

The new Microsoft Store is a huge step forward for both the company and third-party developers. Devs can use their proprietary payment systems and CDNs, publish unpackaged apps, third-party browsers, and even stores. The first third-party store, Epic Games Store, is already available for download. As for apps, Mozilla Firefox is on the way to the newest Store, coming there later this year.