Microsoft today released Windows 10 Insider Preview Build 17133 to Windows Insiders in the Slow ring. This build is likely to be the RTM build for the upcoming "Spring Creators Update" feature update to the OS.

According to various sources close to the company, a week ago Microsoft internally signed-off build 17133 as the RTM build, which will be released to manufacturers for pre-loading onto new devices.

Unlike the Fast Ring update, the package doesn't identify itself as a Release Preview update. Instead, it appears like a feature update in the Settings app. See the following screenshots. 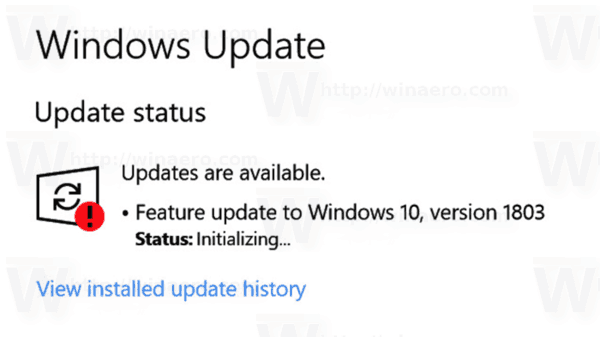 So, the next step for Build 17133 is to be released to the Release Preview ring insiders. Also, the official ISO images should be released soon.

At this point, if you are interested in leaving the Insider Preview program, you can safely stop receiving new builds. Windows 10 Build 17133 will receive a few cumulative updates before being pushed to the stable branch, then the Fast Ring will start getting "Redstone 5" builds. See the following article for reference:

How to Stop Receiving Insider Preview Builds in Windows 10

To learn what's new in Windows 10 Build 17133, please refer to the article