One of the most popular, open source video players, VLC is getting 360° video support in its latest preview versions for Mac and Windows. The feature will be available to all users in the final version that will be released by the end of the month, but you can try it right now with preview builds of VLC. 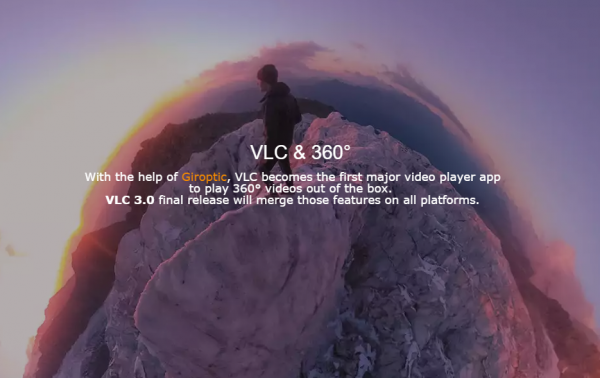 The 360° video playback feature is part of VideoLan's partnership with camera maker Giroptic. With VLC 3.0, you will be able to open 360° photos, videos and panoramas. VLC developers also shared the following details about 360° playback:

In the near future, you'll also be able to experience such videos with VLC using VR headsets like HTC Vive and Oculus Rift, which heavily utilize head tracking technologies and allow you to not only watch videos from the camera's perspective, but also hear the sound exactly like it was recorded, creating a fully immersive experience.

You can download VLC 3.0 Technical Preview with 360° video playback for Mac or Windows from a special page on the developer's website.