Opera might not be the most popular browser, but developers continuously try to obtain more users by bringing interesting features. Also, Opera decided to support new policies in the Microsoft Store and release its browser to the marketplace for Windows 11. For the first time in almost a decade, users can download a Chromium-based browser from third-party from the Microsoft Store.

Microsoft previously allowed developers to publish their browsers in the Microsoft Store as long as they used EdgeHTML (proprietary rendering engine found in now-deceased Edge Legacy). Access to the Microsoft Store for projects, such as Firefox, Chrome, Opera, or Vivaldi, was tightly shut behind an iron curtain of strict policies. Now, after realizing the Store cannot gain traction, Microsoft lifts restrictions. 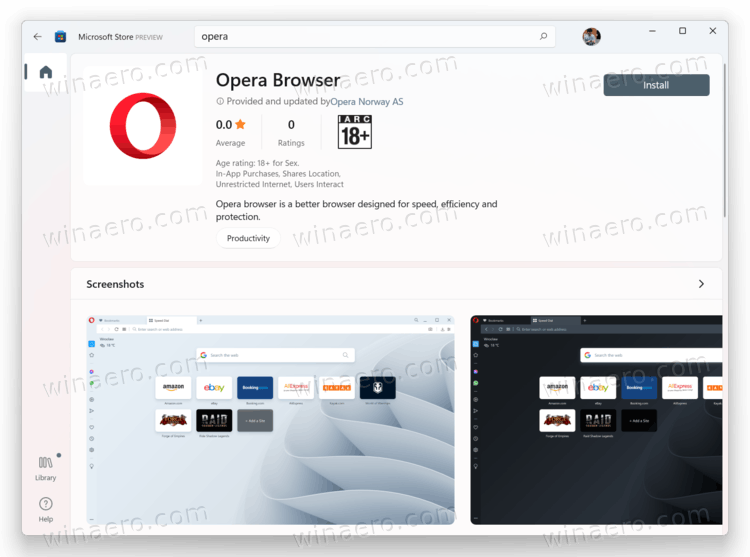 The Software giant now accepts virtually any application in the Microsoft Store. Third-party marketplaces, browsers with various rendering engines, apps with third-party CDNs and payment systems, unpackaged apps, and many more. Microsoft welcomes everyone. Developers, in turn, gladly hop on. The Microsoft Store now offers popular apps, such as Discord, TikTok, Adobe Creative Cloud, etc. Users no longer need to look for installers on the Internet, although the apps might still use their update mechanisms to install new versions.

In case you missed it, Microsoft Edge is also available from the default marketplace for Windows 11. Now Microsoft needs to bring Chrome, Vivaldi, and Firefox to complete the picture.