AdDuplex has published a new statistical report on the usage stats of Windows versions, which now also includes data on Insider builds of Windows 11. According to the published information, in September the share of Windows 10 May 2021 Update (version 21H1) reached 38.1%. 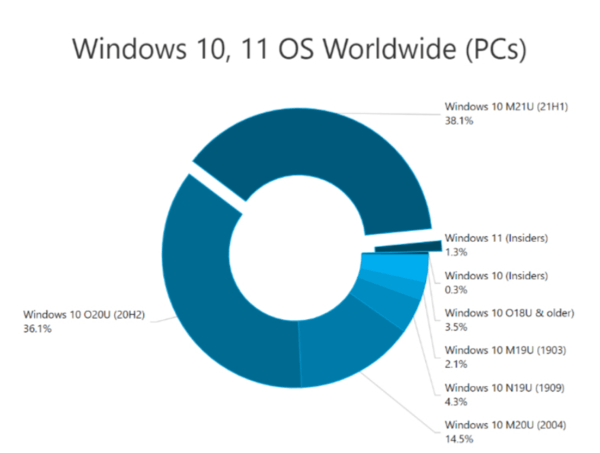 If you are curious about Insider builds of Windows 11, according to the report, they are now used on 1.3% of devices, which is 0.4% more than in July.

Adduplex gathers its data from approximately 80,000 PCs with apps that contain AdDuplex SDK. Considering more than a billion devices are running different Windows 10 versions, AdDuplex's data can be not that accurate. Today's report is build using the data collected by nearly 5k apps that use the company's SDK. But the monthly reports from AdDuplex are the only data source to track the market share of Windows versions. Microsoft does not provide any official statistics about Windows 10 usage, so users and developers need to work with reports similar to those from AdDuplex.