In Windows 10, when you hover over a taskbar button of a running app or group of apps, a thumbnail preview appears on the screen. For a single window it shows a single thumbnail, and for multiple windows it shows a number of thumbnail previews in a row. When the number of open windows reaches the threshold, the taskbar shows open windows as a list instead of thumbnails. Here's how to change the threshold in order to reduce or increase the number of thumbnails to change them to a list. Depending on your screen resolution and DPI, the threshold value's default may vary. For example, for 1024x768 resolution, it shows thumbnails up to 10 windows but turns it into a list when the 11th window is opened. For 1920x1080, the threshold is 16 windows, by default.

To change taskbar thumbnail threshold to show windows as a list in Windows 10, do the following. 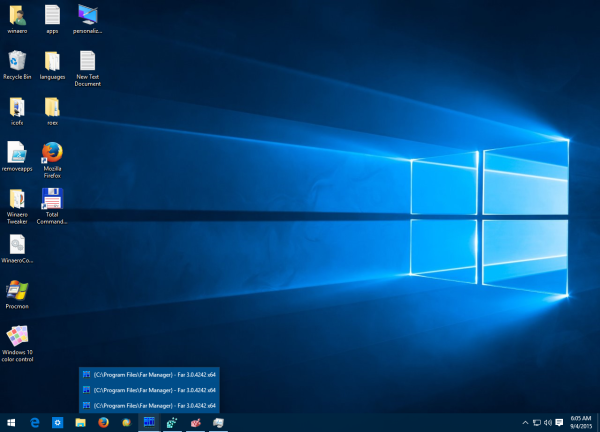 To restore the default behavior, you need to delete the NumThumbnails 32-bit DWORD value under the key HKEY_CURRENT_USER\SOFTWARE\Microsoft\Windows\CurrentVersion\Explorer\Taskband. After that, sign out and sign in to your user account or restart the Explorer shell.