After announcing that Skype for Linux will be retired in favor of the newly developed, completely different Skype beta client for Linux, Microsoft has also announced that some Skype clients for the Windows platform will stop working on July 1, 2017. This will impact Skype users on Windows Phone (8 and 8.1) and Windows RT devices, as well as TVs and users of the Skype Messaging app integration in Windows 10 Mobile. 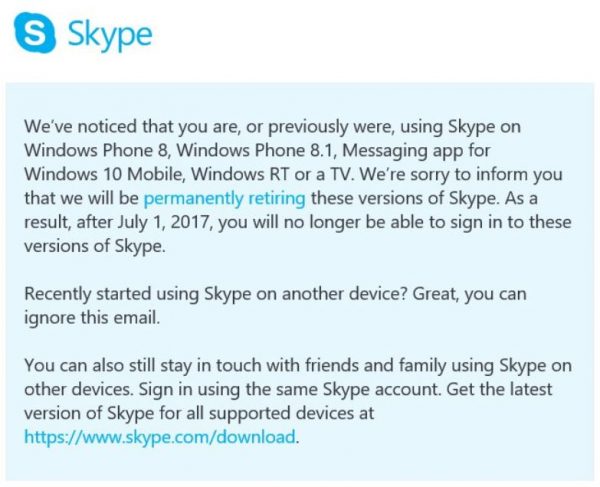 After the mentioned date, users of the said platforms won't be able to log in to Skype apps because of the server-side changes that will be rolled out. This isn't the first time Microsoft has deprecated an old version of the app and left some users behind without any means to use Skype at all. But Microsoft claims this is important for the service to evolve into a more stable and reliable product.

Also, Microsoft is going to discontinue the classic version of Skype for Linux. Starting July 1, 2017, Linux users of Skype have to move to the modern Electron-based app. The classic Skype for Linux, version 4.3, is the last version of Skype with peer-to-peer protocol (P2P) support. The Redmond giant is about to drop server-side support for all older Skype clients which use the peer-to-peer protocol to establish a connection between clients.

So, starting from July 1, 2017, there will be no way to use Skype on old Windows Phone devices, Windows RT tablets and TVs which had it preinstalled or downloaded from the vendor's app store. Microsoft is expecting this transition to go smoothly and without any technical issues for others on desktop Windows versions and Android/iOS devices.