As you may remember, a few days ago Microsoft announced that Skype versions which utilize the P2P protocol will be discontinued on March 1st, 2017. This will affect certain versions of Skype for Windows and macOS. It was assumed that the classic Linux version of the app will stop working as well, because it is using the P2P protocol too. But for now, it's going to continue to work.

Official information from Microsoft reveals that the Redmond software giant is not going to discontinue the classic app for Linux yet. A different, newer Skype client app for Linux is in development as you may know from our coverage of it here at Winaero. But Skype 4.3 can still be used for some time.

It is interesting that a number of classic Skype for Linux users already received an email that suggested them to switch from Skype 4.3 to the newer version before March 1st. The official response states that these notifications were sent by mistake.

It is not specified when exactly Microsoft will discontinue the older Linux app, but the announcement hints that some of its features may stop working.

The new Skype app for Linux is a web app wrapped using the Electron platform with Node.js. The current status of the project is "alpha". The application is not finished, but already comes with basic functionality. 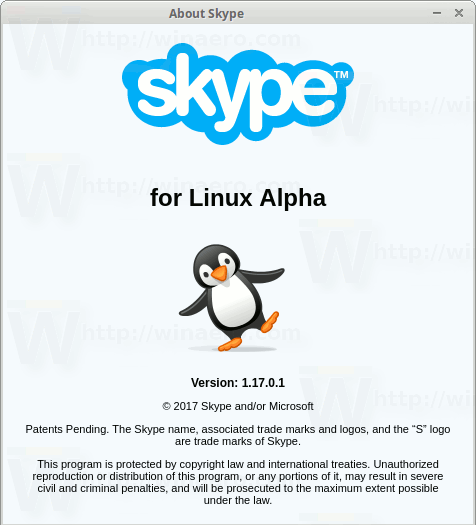 The new Skype for Linux is using a modern version of the Skype protocol but has issues when trying to connect with the classic Linux app. Some users are not happy with these changes, as the new app consumes a lot of system resources despite being far behind the classic version.

As some point, the older Skype app for Linux will definitely be discontinued once the new app is declared 'feature complete' by Microsoft and becomes ready for everyday use.