Almost all modern devices come with a camera these days. Laptops and tablets come with webcams and 2-in-1s like Surface come with dual cameras. Windows 10 ships with a Camera app for all essential functionality related to capturing video or pictures. Skype calls, various online services, Win32 apps and Universal apps can access your camera. From a privacy point of view, it is a good idea to control which of your installed apps have access to the camera and revoke permissions if that app does not really need camera access for its core function. Here is how it can be done.


Most external web cams and portable devices have an activity indicator, which is usually a LED that turns on when the camera is in use by an app. If your device does not have a LED for the built-in camera, Windows 10 shows a notification which can be quickly viewed in the Action Center. You can pick apps which are allowed to access the camera.

Prevent Apps from Accessing Camera in Windows 10
The Settings app in Windows 10 provides a simple user interface which should be enough in most cases.

Alternatively, you can turn off camera access for apps in Windows 10 using a simple Registry tweak. 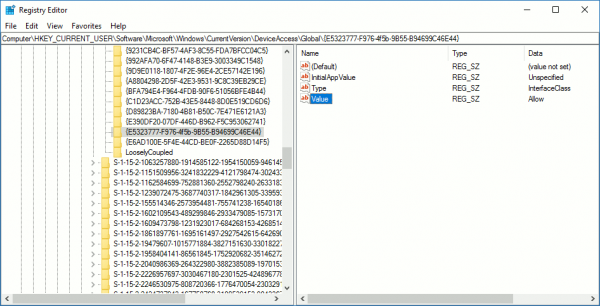 The change should be applied instantly.

There is a special Group Policy setting in Windows 10 which can be used to deny camera access to apps. Before you continue, please keep in mind that Group Policy overrides options in the Settings app and disables them, so the user won't be able to change anything when the Group Policy option is applied.

Using Local Group Policy
If your edition of Windows 10 comes with the Group Policy editor app (gpedit.msc), use it as follows.

To undo this trick, you need to set the mentioned policy to the "Not configured" state.

Tip: You can use the mentioned policy to whitelist or blacklist certain apps from accessing the camera. The user interface of the Group Policy Editor has text boxes to enter AppIDs of installed apps. These boxes are:

To fill these boxes, you need to know Package Family Name for the installed app. To get it, do the following.

In the example below, I whitelisted the Edge app but blocked all other apps by default. 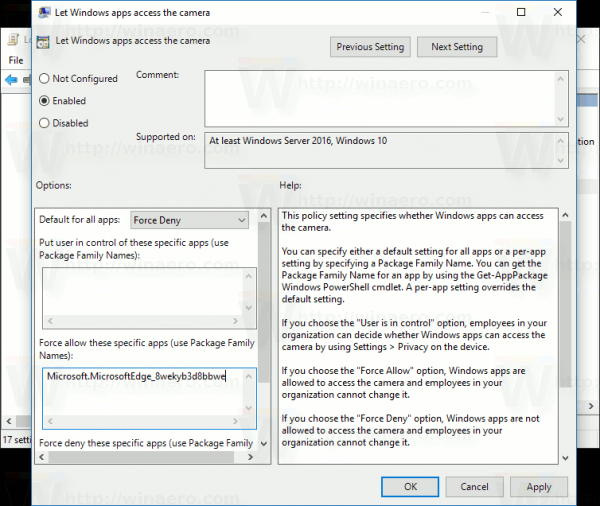