Starting in Windows 10 build 20175, Microsoft had made it possible to pin individual websites to the taskbar from Microsoft Edge. Clicking a pinned site on the Taskbar will now show you all of the open tabs for that site across any of your Microsoft Edge windows.

Pinning websites to the taskbar

Microsoft Edge allows you to pin websites to the Taskbar, so each will appear with its own original icon for quick access to tabs for your pinned sites. Such pinned sites will always open in Microsoft Edge.

Starting with Microsoft Edge Build 85.0.561.0 or above, clicking a pinned site on the Taskbar will now show you all of the open tabs for that site across any of your Microsoft Edge windows, just like you would expect for any app with multiple open windows.

To Pin Site to Taskbar in Microsoft Edge Chromium,

You are done. You can later unpin the pinned web site by right-clicking on its taskbar icon and then selecting 'Unpin from taskbar'.

Note: When you pin a website to the taskbar in Microsoft Edge, the pinned website will also appear under Apps > All apps and pins in the main menu of Microsoft Edge. 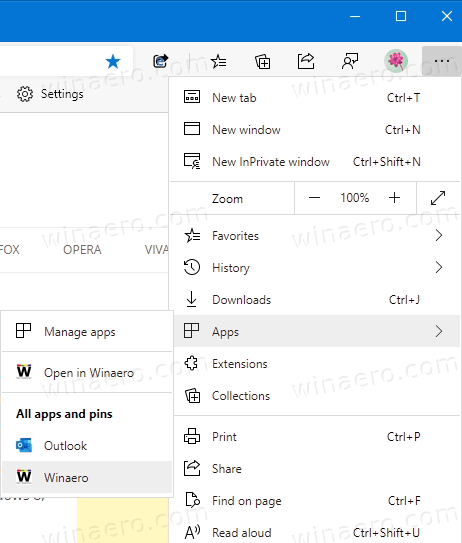 Unpinning a site from the taskbar will not remove the site from there. To get rid of the entry under Apps > All apps and pins,  click on Manage apps and click on the remove button with the X icon for the website.