Earlier this year, during the Build 2017 keynote, Microsoft announced a new version of its Photos app which comes preinstalled with Windows 10. Shortly after the initial announcement, some new features have been rolled out as an update for members of the Windows Insider program. But a few days ago, the company finally made them available for everyone, including those on the current branch release, Windows 10 Creators Update (version 1703). 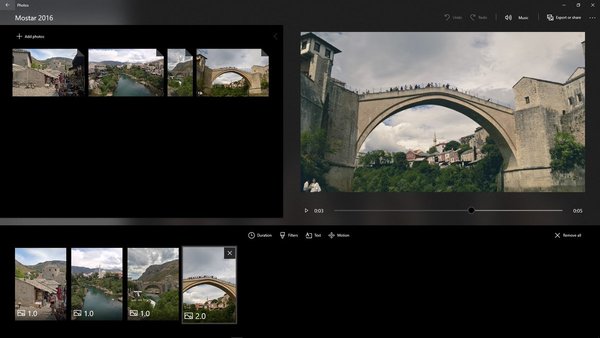 The new features include an improved system of photo tagging, allowing users to search in the library by photo content or theme. This is AI-based. But the most interesting part of the update is the Story Remix feature, which will let you create videos from your gallery contents and add some unique touches to them, including adding a soundtrack, transitions and special effects.

Here's a simple example of what you can do with the Story Remix feature in the latest Photos app update:

Of course, you can later share these videos or edit them if you found some rough parts you'd like to change. The app can also create similar videos automatically, utilizing the Microsoft Graph API for data analysis.

Story Remix will also let you add some 3D objects to photos and videos created with it, but for some reason this feature is available only to some Windows 10 users right now, with others reporting about its absence in the latest app update. Microsoft may be doing more A/B testing here, it seems.

The update also brings some of the Fluent Design elements to the app's user interface.