Still, it remains unknown how Microsoft will treat those running Windows 11 on unsupported hardware. Microsoft cannot distinctly say whether users will get proper updates or not. At least, the company appears to plan to warn people about the potential risks of using Windows 11 on computers that do not meet minimum hardware requirements. 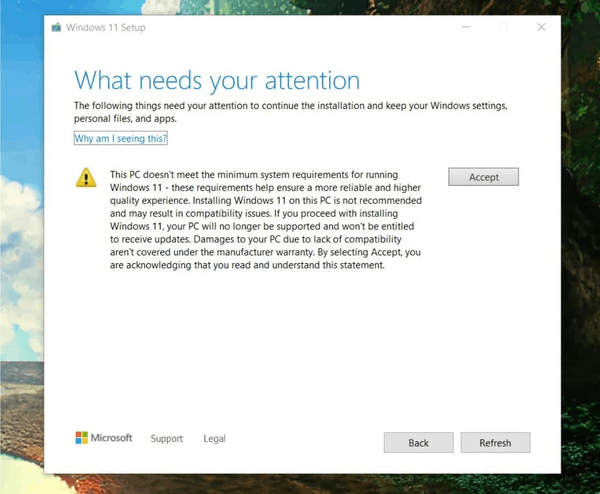 The Verge reports that an attempt to install Windows 11 preview on a PC with Intel Core i7-7700K ended up with Microsoft asking the user to sign a waiver and acknowledge potential compatibility issues or even void the manufacturer warranty. Also, the message vaguely says that "your PC won't be entitled to receive updates."

What needs your attention

The following things need your attention to continue the installation and keep your Windows settings, personal files, and apps.
This PC doesn't meet the minimum system requirements for running Windows 11 - these requirements help ensure a more reliable and higher quality experience. Installing Windows 11 on this PC is not recommended and may result in compatibility issues. If you proceed with installing Windows 11, your PC will no longer be supported and won't be entitled
to receive updates. Damages to your PC due to lack of compatibility aren't covered under the manufacturer warranty. By selecting Accept, you are acknowledging that you read and understand this statement.

Again, the lack of clear communication is puzzling as Microsoft fails to explain update policies for older computers. They might get security updates and patches or might not. Nobody knows.

If you want to know what Microsoft has in store for your computer once Windows 11 is out on October 5, 2021, use the PC Health Check tool. It gets the information about your PC specs and configuration, then compares it with the official requirements. PCs that pass the test will receive Windows 11 automatically via Windows Update in the coming months. Other users will have to update their system manually using ISOs and Media Creation Tool. And it looks like the latter will force you to acknowledge the risks before proceeding. Microsoft really does not want you to run Windows 11 on old hardware, but the users' backlash forced the company to accept some compromises. No wonder Microsoft now tries to play it safe.