This feature is new to Windows 10 so it won't work with earlier releases of Windows. When applied, it will allow you to switch between apps using the taskbar even if the Touch Keyboard is open. This can be handy on devices with touch screen input. The tweak can really save your time and increase your productivity. Here is what you have to do.

To Keep Taskbar Visible with Touch Keyboard in Windows 10, apply the Registry tweak as described below.

Once this is done, the Touch Keyboard will appear above the taskbar, so your running tasks, pinned apps, clock and the notification area (system tray) will remain visible and accessible with a single tap or click.

To save your time, I have created ready-to-use Registry files which you can download here:

You can save your time and use Winaero Tweaker instead. It comes with the following feature: 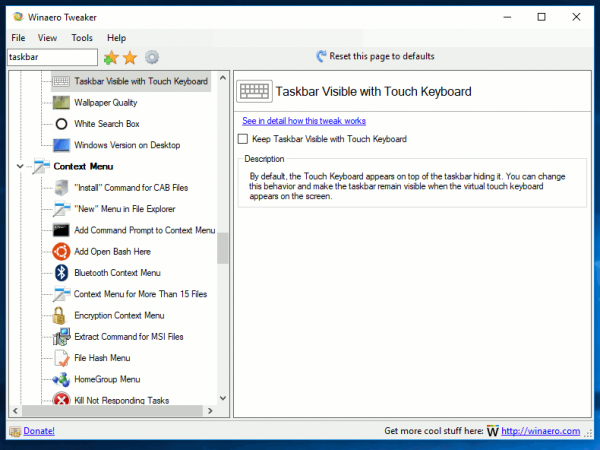 The Touch Keyboard is the built-in app in Windows 10 to type using a touchscreen or a pen. It is included since Windows XP Tablet PC Edition and has undergone several changes in Windows Vista, Windows 7 and Windows 8.