By default, Windows adds a zone information to each of the files downloaded from the Internet or received by email. When you are opening any file, the operating systems analyzes that data. If the zone info presents and is refers to the "unsafe" source, you see a warning.

This functionality is implemented in the Attachment Manager component. It writes the zone information to a special area called "alternate data steam" which is invisible to the end user. Such streams, also known as "metadata", only exist on NTFS partitions.

Attachment Manager identifies how risky the downloaded file can be for you by several factors. In short, it checks with what program you open the file, the type of the file, and the source from where you obtained the file.

There are three levels of security warnings you may see when opening a downloaded file.

If you find inconvenient to see such prompts every time you open the downloaded files, you need to unblock them. Here is how.

Perhaps you already know that you can unlock some files by simply opening them. E.g. if you double-click an executable file, you can unlock it right from the security prompt.

But if you have plenty of such files, it is an annoying task to unblock each of them individually. A solution here is to unlock all the files at once in a folder.

Unblock All Files in a Folder

Tip: You can make PowerShell to ask you for confirmation for each of the files. For that, modify the commands above by adding the -confirm argument after unblock-file.

The command may look as follows.

To save your time, you can add a special context menu to File Explorer. After you can unlock one or all files in a folder by right-clicking it. The context menu entries will invoke the PowerShell commands we have reviewed in the previous chapters.

Note that clicking the Unblock item in the context menu for a folder will unblock all its files at once. There will be an option to unblock all files recursively.

Here's how to add the menu.

You are done. You can remove the added menu at any moment later using the other REG file, "Remove Unblock Context Menu.reg".

Finally, if you are brave enough, you can turn off the addition of the zone info to downloaded files. This will prevent Windows from blocking them, and you will no longer need to unblock them using any of the methods.

From now, Windows will no longer block the downloaded files. The ZIP archive also contains an undo tweak, Enable_blocking_of_downloaded_files.reg.

These two files modify the HKEY_CURRENT_USER\Software\Microsoft\Windows\CurrentVersion\Policies\Attachments Registry key. There, they change the SaveZoneInformation DWORD value to one of the following numbers: 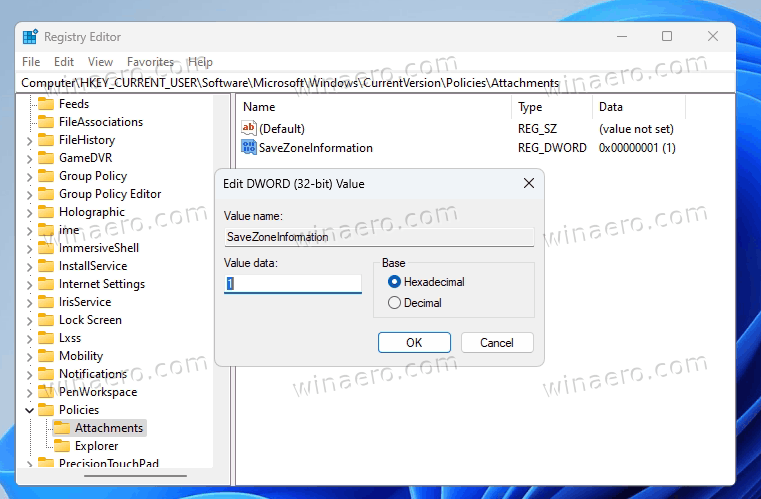 If you are running Windows 11 Pro, Education or Enterprise editions, you can use the Local Group Policy editor to configure the reviewed option without editing the Registry. Here's how.

You are done! You can disable the policy at any moment of time in order to restore the default behavior of the operating system.

Finally, you can use Winaero Tweaker to prevent Windows from blocking your downloads.

Download the app from here and install it. Select Behavior > Disable Downloads Blocking in the left. 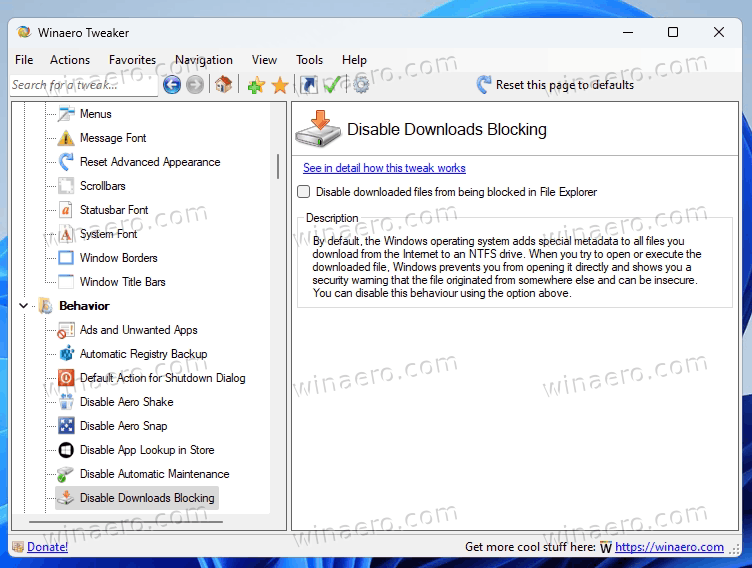 Now, all you need to do is to check the option on the right.

Besides this setting, you will find a bunch of other options for customizing Windows. Winaero Tweaker is intended to become your Swiss Knife for configuring modern Windows versions with a couple of clicks.

That's all about disabling the blocking of downloads.