Here's how to restart Firefox and do not lose open tabs.

There are many occasions when you need to restart Mozilla Firefox. For example, when you enable some secret hidden feature in the Firefox browser via about:config such as "Hello" in order to use the WebRTC feature, you may need to restart it. Installing or uninstalling add-ons also means you have to restart it. While it is easy to close all tabs in Firefox manually and re-launch it, I would like to share with you a faster way which involves the built-in Firefox option.

There are two methods that you can use to relaunch the Firefox browser. The advantage of these methods is that you won't lose your open tabs, as they will remain open after the relaunch.

This post will show you how to restart the Firefox browser without losing open tabs.

How to restart Firefox

As mentioned above, this will save your open tabs, so Firefox will re-open them.

The alternative to the above method is About:RestartRequired page.

Restart Firefox from the About:RestartRequired page

The about:restartequired page is a special system page in the Firefox browser. It opens automatically when the browser detects that it needs to be restarted to fix an issue, or install an update.

To restart Firefox from the about:restartequired page, do the following.

Finally, the below is a legacy method that doesn't work any longer in Firefox. It involves the console, which is now removed from modern Firefox versions. Doesn't use it, just read for reference.

We already covered Firefox commands to get the HTML color code, capture a screenshot of the webpage and open any folder directly from Firefox. Now, let's see how to use the command line to restart Firefox immediately.

Open Firefox and press Shift + F2 on the keyboard. Firefox will open a console / command line at the bottom of the screen. We will use this command line to execute the restart command.
Type the following text in the command box you just opened. The command is self-explanatory: 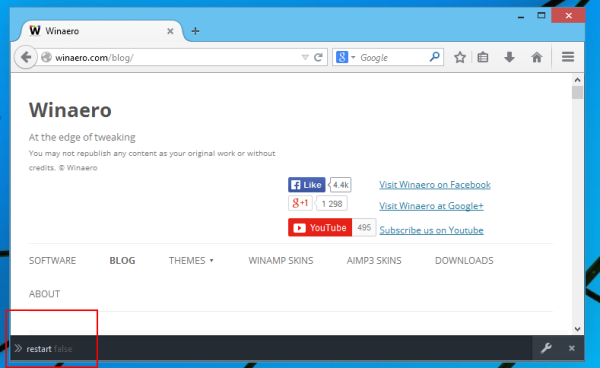 This quickly closes all your tabs and restarts the browser.

Additionally, there is another useful argument for the restart command:

The optional nocache argument, when specified, tells Firefox to not use the local cache to load the previous session. This can help when you want force it to refresh the content in previously opened tabs. Note that you must enter the nocache argument without the square brackets.

3 thoughts on “How to restart Firefox with a single click”