Today, Google announced that the Password Checker feature is coming to every smartphone and tablet with Android 9 and newer to ensure you do not use breached passwords and notify about credentials leaks.

Password Checker was born as a Chrome extension at the end of 2019 and later became a part of Google’s browser. Now it is integrated into the mobile operating system. Google says users can access Password Checker on smartphones and tablets with Android 9 and newer. 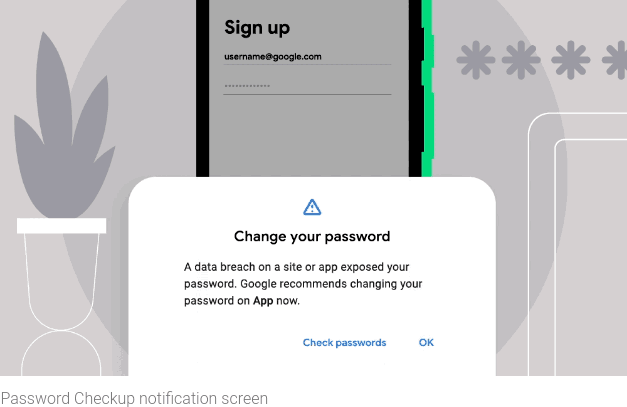 Password Checker is a special security feature built into the default password manager and autofill on Android and Google Chrome. It notifies a user when stored in the account passwords end up in data leaks or breaches. When the notification pops on the screen, Google offers an option to change passwords for compromised accounts. Similar features exist in third-party password managers, such as 1Password.

The company explicitly clarifies that it does not share users’ passwords with any third parties, nor can it see them in plain text. The system performs an on-device check of the encrypted hash of the credentials with hashes of breached passwords received from servers. According to Google, servers cannot access unencrypted users’ passwords, and neither can users access the unencrypted database of leaked credentials.

It is good to see Password Checker coming not only to the latest Android versions but also to older devices that no longer receive updates. With this change, users can secure their accounts without spending money on paid third-party password managers or newer devices.

If you do not want to store your passwords in the Google account, you can use similar free solutions. For example, Microsoft recently announced a major update to its Authenticator app, which can now autofill passwords on mobile devices and sync them on different browsers, such as Chrome. Password autofill in Microsoft Authenticator is available for free, and the only requirement is a Microsoft account. Similar features exist in iOS and mainstream browsers, such as Microsoft Edge, Firefox, Safari, Chrome, etc.