Firefox 88 is already here, and you can download this new version of the popular browser. In a few hours the update will be rolled out to existing app users. The release is relatively minor. It includes mostly general improvements and security fixes. There are also a few notable visual changes. 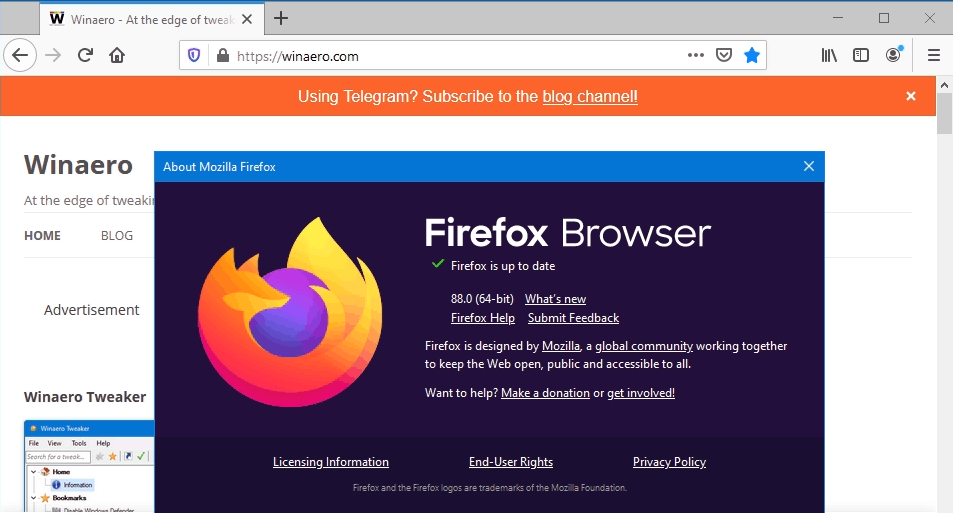 Firefox 88 is the first version of the browser in which FTP support is disabled by default. You can re-enable it by setting the network.ftp.enabled option to true in about:config. However, keep in mind that FTP support will be completely removed from Firefox in version 90.

Another change is the Take Screenshot page action that is no longer available on the address bar menu. However, the screenshot functionality is not removed. You can add the "screenshot" button to the toolbar, or quickly capture it from the page context menu. See

How to Take Page Screenshot in Firefox 88

Mozilla has already started testing the page isolation feature in Firefox 88.  The Window.name JS property data is now only accessible to the website where the child window was created on. This will prevent ad networks and other scripts from abusing the property for user tracking.

Also note that the next major version, Firefox 89, has been postponed by two weeks and is now dated May 31, 21. The reason is that the Firefox team has more time to devote to the new Proton design.

You can download Firefox 88 from its official web site.

One thought on “Firefox 88 released, here are the key changes”