Mozilla has removed the screenshot option from the page actions menu, here is how to take a page screenshot in Firefox 88.

There are many significant changes in Firefox looming over the horizon. Besides the drastic UI overhaul, Mozilla is tweaking some other bits and pieces in its browser. For example, the Compact UI is going away, and access to the built-in screenshot tool is also getting removed. With the release of Firefox 88, the developers is about to remove the screenshot command from the page actions menu in the address bar.

The following image shows the current version of the page actions menu in Firefox.

Here is the updated menu in the latest Nightly channel builds that represent the upcoming version 88 of the app. The Take screenshot option is missing.

If you are used to take web page screenshots using Firefox’s built-in screenshot tool, there is good news that it is not going anyway entirely. The developers just made this option a bit harder to discover. Instead of using the three dots menu (page actions) in the address bar, you need to add the screenshot button to the toolbar.

Also, it is worth mentioning that the "Take Screenshot" command is currently available in the right-click menu of any page. 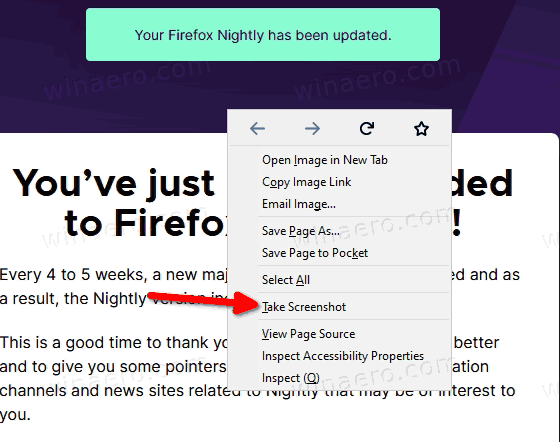 However, that menu is on the way to the Proton UI redesign, so it may or may not disappear from there with upcoming Firefox updates, and may not reach the Firefox 88 stable release.

It is hard to explain the logic behind this decision. Perhaps, this change is temporary, and it should not appear in the stable channel. There is no official word from Mozilla on removing the screenshot tool from the address bar, so we can only guess the purpose of this change.

Unlike Firefox, Microsoft seems to be bringing more customization and flexibility to the Edge browser. You can easily access the built-in Web Capture tool from the main menu or toolbar, and there is no need to enable any experimental flags to make it visible. There is no denying that Firefox has many strong points, but some recent changes are just hard to understand. Luckily, there are also some good changes coming soon. For example, the developers are getting ready to ship enhanced site isolation to improve security.

10 thoughts on “How to Take Page Screenshot in Firefox 88”