You can play the Tux character exclusively on Linux when in the Surf Game of Edge browser.

Despite sharing a common rendering engine with Google Chrome, Microsoft had to cut off and replace many of Google's technologies and software pieces when developing a Chromium-based Edge. One of the things Microsoft ditched in Edge Chromium is a built-in Dino game you can play when the Internet is down (or using the chrome://dino URL). Instead of a somewhat primitive monochrome game in Chrome, Edge offers a much more engaging Surf game, a throwback to the classic Windows SkiFree game.

In Edge 96, Microsoft replaced the surf theme with the ski theme, offering users to hit the slope and try to slide away from the yeti. It appears that Edge Surf has a hidden platform-specific easter egg.

Linux users have found that Surf allows playing for the platform's mascot, penguin Tux. We have tried it here and found out that Edge Dev is the only browser version that properly renders Tux on Ubuntu 18.04.

To try that out, you need to update the browser to recently introduced version 96. The game itself works in older releases of the Edge browser, but Tux is available only in version 96 and newer. 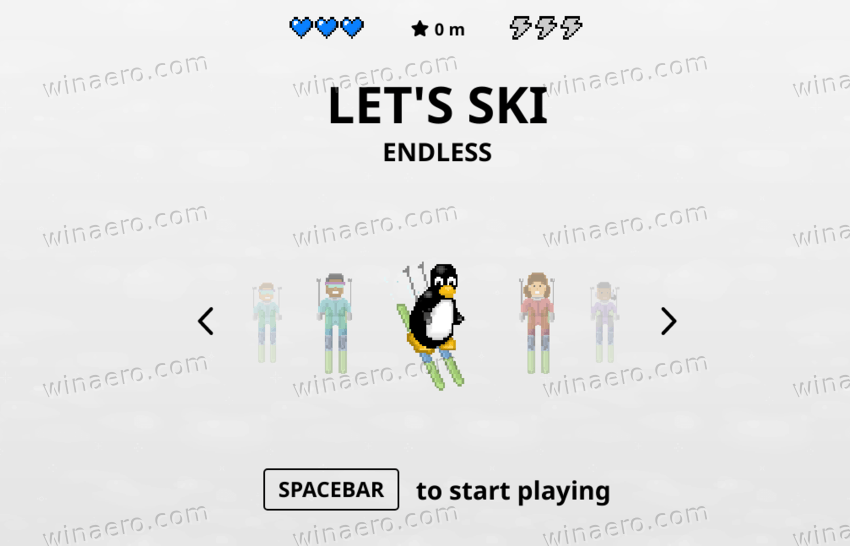 If you want to kill some time in Edge Surf, head to edge://surf. You can choose between several characters and three game modes: endless, time trial, and zigzag.

While Tux is Linux-exclusive, Windows users have their own platform-specific bonus—Ninja Cat (Windows Insider Program mascot). Edge Surf is also available on macOS and Android—not on iOS, for some reason—although those two platforms have no exclusive modes or characters.

Linux was the latest platform to join the list of supported operating systems by Microsoft Edge. The browser currently works on Windows, macOS, Linux, Android, and iOS.

Moreover, Edge works even on now-deceased Windows 7, although the end of support for the latter is drawing nigh. Google recently announced plans to stop providing updates for Chrome on Windows 7 on January 15, 2023, the same day when Microsoft will also end the ESU (Extended Security Updates) program. It is safe to assume that Microsoft will stop supporting Edge for Windows 7 then as well.