DTrace is the popular open source debugging and diagnostic tool. It has originally been built for Solaris, and became available for Linux, FreeBSD, NetBSD, and macOS. Microsoft has ported it to Windows, and adds a portion of updates to it with 20H1 feature update.

DTrace is a dynamic tracing framework that allows an admin or developer to get a real-time look into a system either in user or kernel mode. DTrace has a C-style high level and powerful programming language that allows you to dynamically insert trace points. Using these dynamically inserted trace points, you can filter on conditions or errors, write code to analyze lock patterns, detect deadlocks, etc.

On Windows, DTrace extends Event Tracing for Windows (ETW) which is static and does not provide the ability to programmatically insert trace points at runtime.

All APIs and functionality used by dtrace.sys are documented calls. 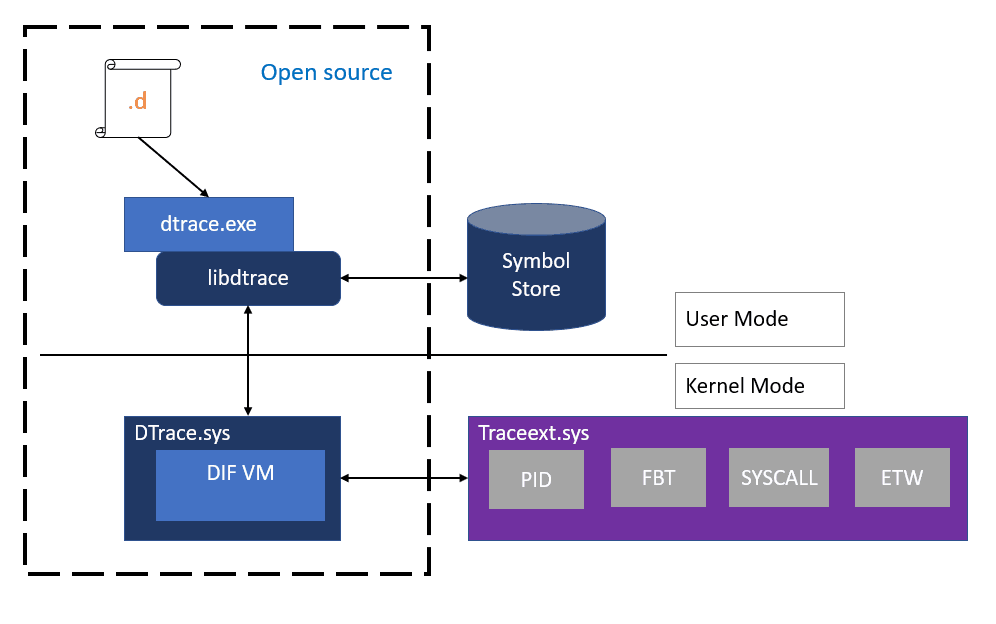 Microsoft has implemented a special driver for Windows 10 that allows performing a number of system-monitoring roles. The driver is built in Windows 10 starting in version 1903. 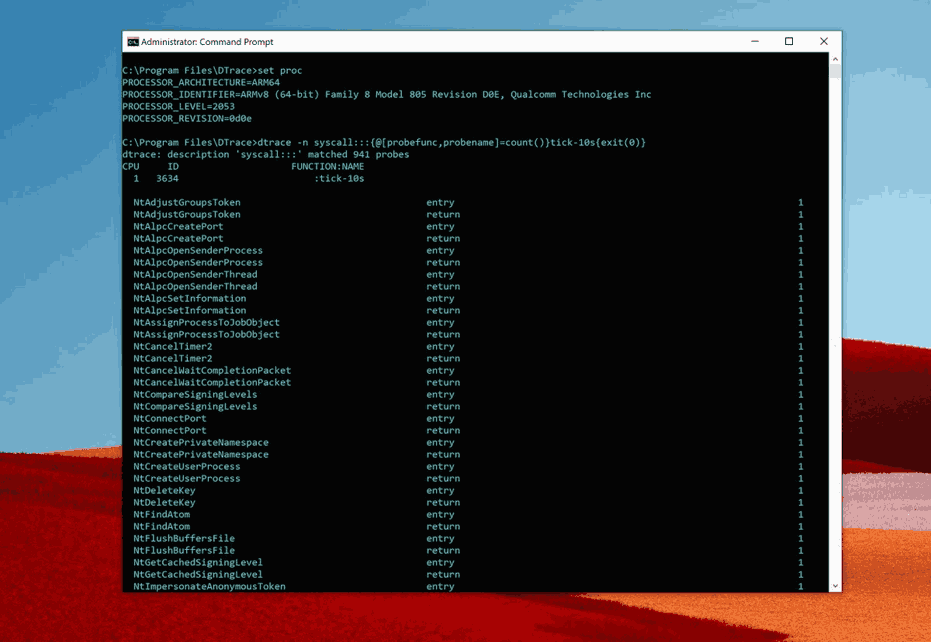 In the preview, the stackwalk facility in DTrace was limited to Kernel mode (stack). This update adds support for usermode stackwalk facility (ustack). Like stack, ustack facility is fully compatible with open source DTrace specification. It can be invoked in three ways by specifying frames (depth) & size (ignored for now) or void.

While ustack () can determine the address of the calling frame when probe fires, the stack frames will not be translated into symbols until the ustack () action is processed at user-mode by DTrace consumer. Symbol download can slow down the output. Hence, it’s better to use this facility with locally cached symbols like below.

Windows commonly uses something called Live dump to help quickly diagnose issues. Live dumps help with troubleshooting issues involving multiple processes or system wide issues without downtime. In 20H1, DTrace on Windows can be used to capture a live dump from inside a D-script using the lkd() DTrace facility. A common use case of this facility is to instrument error path (like return code indicates a failure) and capture a live dump right at the failure point for advanced diagnostics. For more information on live dump support, see DTrace Live Dump.

ETW tracing is the most frequently used tool for debugging on Windows. In DTrace on Windows 19H1 preview, we added support for instrumenting tracelogged and manifested events using the ETW provider.

In 20H1, we further enhanced this facility to create new ETW events on the fly from inside a D-script using the ETW_Trace() facility. This helps in situations where existing ETW events are insufficient and you would like to add additional ETW trace points without modifying production code.

If you are interested in installing DTrace, check out how it can be done here.

You can download the updated DTrace MSI package from here.

Here is it source code and advanced scripts.