Recent Windows 10 versions come with a new feature, called "Power Throttling". It should improve the battery life of laptops and tablets on processors which support it. Here is what this feature is and how to disable it.

The main idea behind the feature is to limit the CPU resources for inactive apps. If some application is minimized or runs in the background, it still uses your system resources. For such apps, the operating system will place the CPU in its most energy-efficient operating modes – work gets done, but minimal possible battery is spent on that work. A special smart algorithm will detect active user tasks and keep them running, while all other processes will be throttled. The Task Manager can be used to find the status of such apps. There is a dedicated column "Power Throttling" in Task Manager on the Details tab which will indicate this. 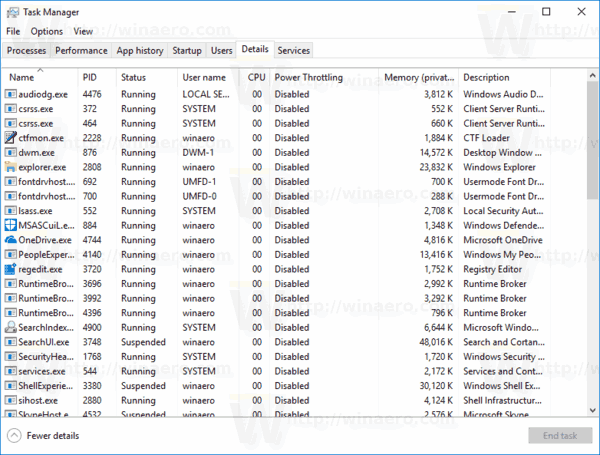 Previously, you could disable the Power Throttling feature by enabling the High Performance power plan in Windows 10. In Fall Creators Update (Windows 10 version 1709), there is a dedicated Group Policy option which can be used to disable Power Throttling. Here is how.

To disable the Power Throttling feature, ensure that you are signed in as Administrator before proceeding.

To disable Power Throttling in Windows 10, do the following.

Later, you can delete the PowerThrottlingOff value to re-enable the feature.

If you are running Windows 10 Pro, Enterprise, or Education edition, you can use the Local Group Policy Editor app to configure the options mentioned above with a GUI.