Some time ago, Google has added a new toolbar button to Chrome, which is hiding extension icons from the toolbar to a menu. This is now enabled by default. Instead of adding them to the right of the address bar, the extensions are now listed in that menu. Today we will review a working method that allows disabling the Extension Toolbar Button in Google Chrome 87.

The purpose of the menu is to allow the user to hide redundant extension buttons from the toolbar.

When the user clicks the puzzle piece icon, the extension menu opens and displays a list of all enabled extensions the user has installed. The extension list is grouped by the level of data access the extension has on the currently selected tab. 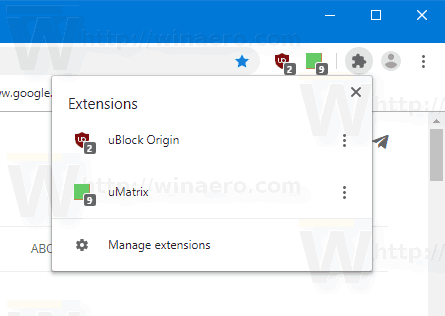 From that menu, you can pin individual extensions to make them always visible in the toolbar instead of being hidden behind the extension button drop-down.

For the icons visible in the toolbar, it is possible to 'Unpin' them from the context menu and move back to the puzzle button menu.

So, extension icons are hidden by default for all the installed extensions, making them harder to spot. This change has already been criticized by developers and experienced users who believe the solution is confusing to the end user.

This post will show you how to disable the extension toolbar button in Google Chrome. The method that works in actual Chrome versions, including Google Chrome 87.

You are done! Now the browser will disable the extension toolbar menu button which hosts all browser extension buttons in a group.

Try to install an extension now. Its icon will directly go to the toolbar.

The old method not longer works in Chrome 87, so you have to use the above method now. The solution came from our reader "Evan", which discovered it after playing with the same option for Microsoft Edge.