So, the annual Microsoft Surface event is over (but you can check its highlights on YouTube). The Redmond software giant introduced a bunch of new devices, including Surface Pro 8, Surface Laptop Studio, Surface Duo 2, Surface Go 3, Surface Pro X, and a number of new accessories. Here are the devices announced today.

Also, this is the first time in Surface device history when they have a USB-C port supporting Thunderbolt 4 technology. The company has previously discarded them, ostensibly for security reasons. The Surface Connect port also remains, so if you prefer to charge your device with Microsoft's magnetic connector, you can still do that. But the USB-A port in the device no longer exists. Surface Pro 8 has a 13-inch display with a 120Hz refresh rate, making the device visually faster and smoother, especially with new animations in Windows 11. 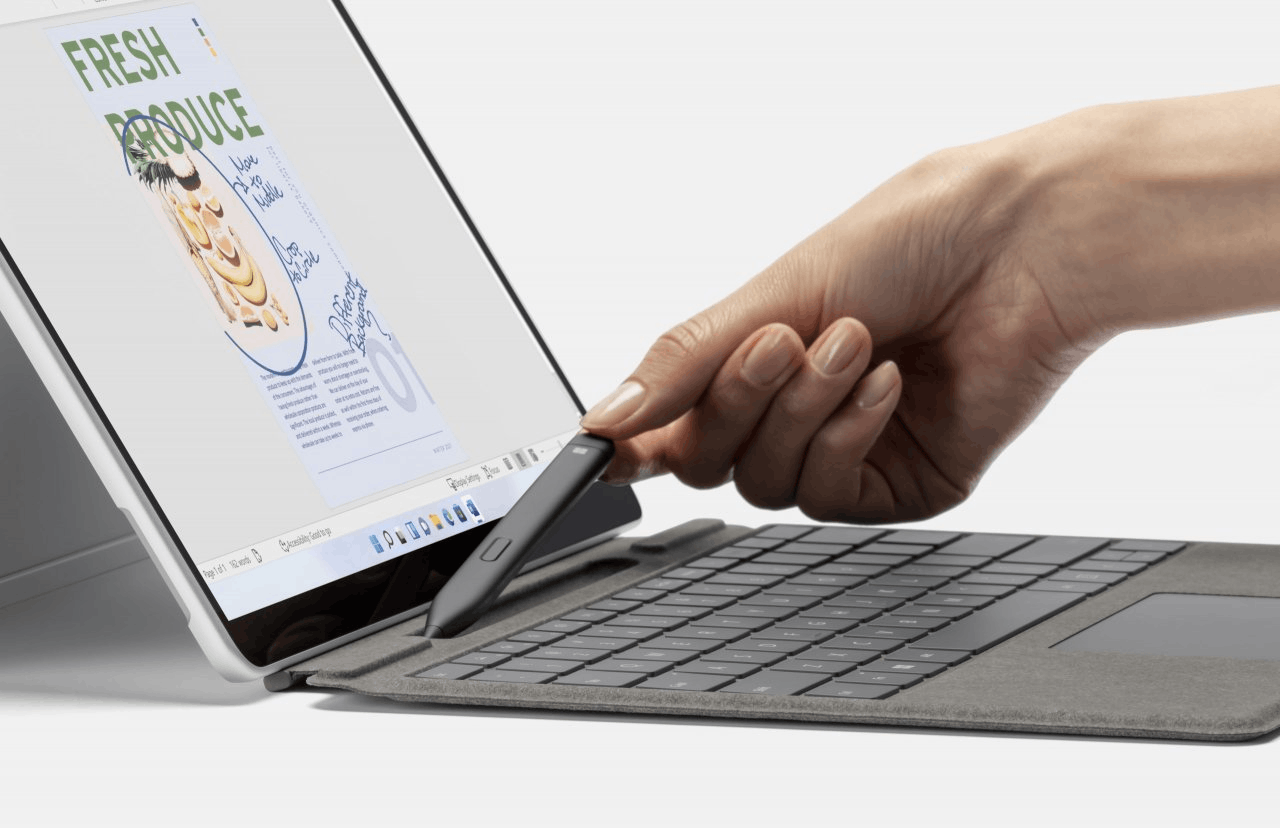 In addition, Microsoft has introduced the new Surface Slim Pen 2. It supports tactile feedback to make drawing and ink feel more realistic. At the same time, it is noted that the technology of tactile feedback will work in third-party applications such as Adobe Photoshop.

Haptic feedback will also work when using gestures in supported apps. For example, you will feel vibration if you erase a word or trace text to highlight it. It is noted that smart feedback will only work on select devices that support the Microsoft Pen Protocol (MPP). Surface Slim Pen 2 supports Bluetooth 5.0 and can last up to 15 hours on a single charge.

You can store and charge the pen with the new Surface Pro Type covers, which, however, are almost identical to the Surface Pro X Type. The main difference is the Windows 11 logo on the Start button on the keyboard.

There is a new flagship device, Surface Laptop Studio, the successor to the Surface Book line. The novelty received a 14.4-inch display with a unique hinge. It allows not only to push the display forward, but also to place it on the keyboard for greater ease of drawing and handwriting.

The Surface Laptop Studio is supercharged by 11th Gen Intel Core i5-11300H or i7-11380H processors, which are slightly more powerful than those found in the Surface Laptop 4 and Surface Pro 8. The device models will have 16GB or 32GB of RAM and an SSD. The SSD storage device can be up to 2 TB. It's also worth noting that the laptop will be able to wirelessly charge the new Surface Slim Pen 2.

The 14.4-inch display has a 120Hz refresh rate, which means the device will feel fast and fluid, including thanks to the new animations in Windows 11. However, the display resolution is not as high as the Surface Book line. The device also features two USB-C ports with Thunderbolt 4 support, a 3.5mm headphone jack and a Surface Connect port.

Another new thing in Surface Laptop Studio is the Precision Haptic touchpad, which is now completely static. Its tactile feedback is created by special mechanisms under the touchpad. A similar implementation is already used in the Apple MacBook.

Microsoft has officially unveiled the second generation of its foldable smartphone called Surface Duo 2. The smartphone has a Snapdragon 888 processor, support for 5G networks, NFC and more.

The key change in the Surface Duo 2 is the triple rear camera. It includes wide-angle and ultra-wide-angle modules, as well as a telephoto lens with resolutions of 12 megapixels, 16 megapixels and 12 megapixels, respectively. Microsoft says the device will be able to deliver flagship imaging capabilities. It claims support for features such as night shooting, portrait mode with background blur and Auto HDR.

Surface Duo 2 features 5.8-inch displays with 90Hz refresh rate. The total diagonal of the screens is 8.3 inches. Interestingly, the displays are slightly curved, so that when closed, a small visible strip of the display remains visible in the hinge area, which shows the current time and notification indicators. 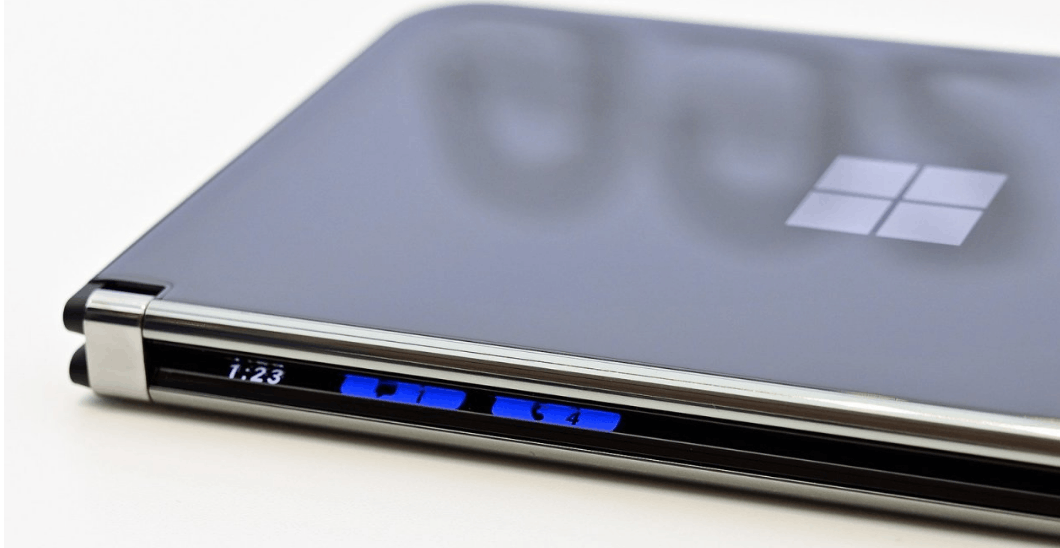 Surface Duo 2 supports Surface Slim Pen 2, so there are now magnets on the back of the case for attaching the pen. In this mode it will be charged from the smartphone. In addition, the device has become a little thicker, which allowed us to solve the problem with breaking out USB-C, and in general the smartphone has become more durable.

The only difference between Go 2 and Go 3 is the new processors from Intel. The new device is available with Intel Pentium Gold 6500Y and Core i3-10100Y, which is a significant upgrade compared to the previous generation, which was equipped only with Intel Gold 4425Y and Core m3 chips. The Surface Go 3 is reportedly 60% faster than its predecessor.

The device runs the newest Windows 11 Home in S mode. The tablet camera supports Windows Hello technology, which allows you to securely log into the system using biometrics. The business editions of Surface Go 3 may come preinstalled with both Windows 10 Pro and Windows 11 Pro. The novelty also supports Microsoft Pen Protocol, although the stylus itself is not included. There is a version with LTE. Even in this configuration, the device lasts an entire day without recharging, according to Microsoft.

Microsoft has introduced yet another version of the Surface Pro X tablet based on ARM-based processors, which will not support LTE at all.

As you may already know, the device uses a custom SQ2 processor, which is based on the Qualcomm Snapdragon 8cx Gen 2. Although the 8cx supports 5G networks, Microsoft has limited cellular use to 4G LTE networks only. And in the new model, only Wi-Fi will be available at all.

Microsoft says the non-LTE Surface Pro X will be the cheapest model. Most likely, this version of the tablet will work on a single charge a little longer than models with LTE support, but the exact numbers have not yet been announced.

Surface Pro X without LTE is already available for pre-order for $899.

The plastic hull uses a special resin developed in collaboration with the Saudi Basic Industries Corporation (SABIC), as well as recycled material "created from plastic waste extracted from oceans and waterways." The plastic waste was turned into granules, which were then mixed with other materials from which the mouse body was produced.

The Ocean Plastic Mouse is powered by a single AA battery, which will last for almost a year of use. It supports Bluetooth Low Energy and Swift Pair.

Microsoft Ocean Plastic Mouse is already available for pre-order at $ 24.99.