Ever since Windows 95, Windows has had a cool feature known as app paths. It allows end users to create their own commands to run anything. Throughout its long history, this little known feature never gained much popularity, probably because it was initially designed for developers to prevent them from adding their apps to the system path variable. Even in Windows 8.1, this feature still exists without any changes, and is still secretly hidden from the eyes of the average Windows user. In this article, we will look at what app paths are and how you can create your own aliases to tremendously boost your working efficiency. 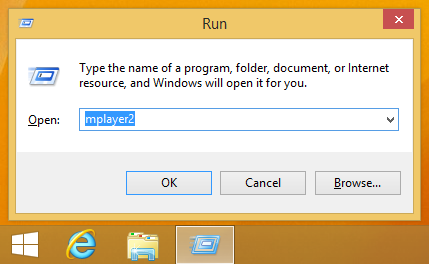 You might wonder how Windows is able to locate and run Media Player using the mplayer2.exe command.

It is possible due to app paths. The Windows Shell uses them to find and run the appropriate executable file associated with the current alias.

Technically every alias is just a subkey of the App Paths registry branch at: 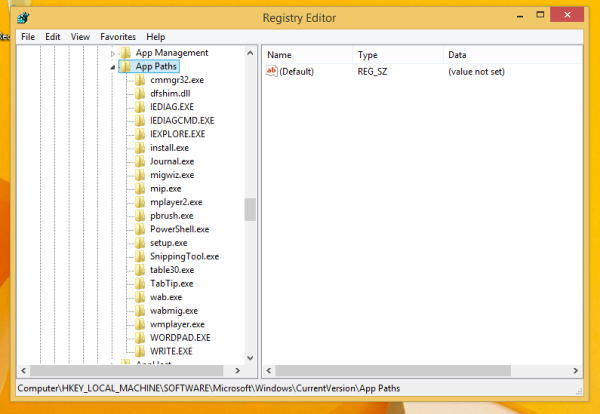 Every subkey of the App Paths key is an alias which looks like someapp.exe. The full path to the target executable file is specified in the default value of this subkey. The value to the target EXE can also have arguments or switches.

Let's look at our example of mplayer2.exe. From the screenshot below you can see that it points to the C:\Program Files (x86)\Windows Media Player\wmplayer.exe, so it will be launched every time the user or some app requests the mplayer2 application. 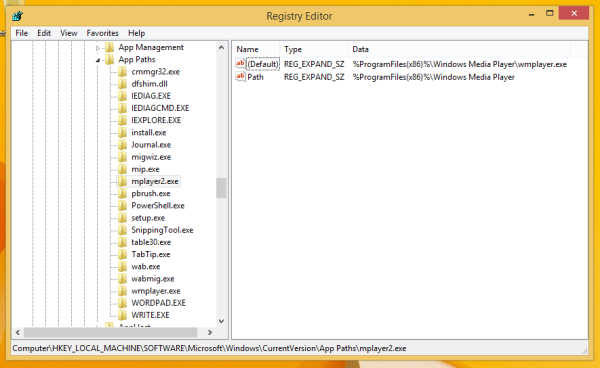 Also, there is another alias, wmplayer.exe which points to the same file but it allows you to avoid using the full path. So you can see multiple different aliases, mplayer2.exe and wmplayer.exe, can both launch C:\Program Files (x86)\Windows Media Player\wmplayer.exe.

Aliases which are stored in the HKEY_LOCAL_MACHINE\Software\Microsoft\Windows\CurrentVersion\App Paths key are system-wide aliases, which all user accounts on that PC can use. Additionally, starting with Windows 7, it is possible to have per-user aliases, which can be specified in the following key:

Per-user aliases are only accessible to the specific user who has them defined in his registry.

By default, Windows has several system-wide aliases and no per-user aliases.

You can use this app paths feature and create custom aliases to launch apps faster. By creating shorter aliases, you can use your Run dialog or the Start Menu's search box as your application launcher.

For example, you can create an alias named ie.exe for the following file:

Using this alias, you will be able to launch Internet Explorer quickly by typing ie into the Run dialog or the Start Menu search box.

I decided to create a tool with a simple user interface to control per-user and system-wide aliases. My portable, Win+R Alias Manager allows you to create aliases for any application and use your Start Menu or the Run dialog as the application launcher.

Using Win+R Alias Manager, you can create aliases for every app you have on your PC, whether it's an installed app or a portable app.

The application allows you to create a per-user alias by default, but you can change this with a simple checkbox:

The alias and file path fields are required, the checkboxes are optional.

The 'System-wide alias (otherwise per-user)' checkbox will allow you to control which aliases are accessible to all users on the system. The last option will add the path containing the application executable file to its local %PATH% environment variable. Most applications do not require this option to be enabled, use it only if you are sure that it needs to be enabled for that particular software.

If you use Windows 7 or Windows 8, I recommend you to use per-user aliases. Windows XP and Windows Vista do not support per-user aliases so you are limited to using only system-wide aliases.

You are here: Home » Windows 8.1 » Launch your favorite apps with useful aliases from the Run dialog