Last week, Microsoft announced its plans to revive the barely abandoned Edge beta program on iOS and open new seats for more users. It did not take long for Microsoft to fulfill the promise. If you have a modern iOS/iPadOS device, you can sign up for the Edge beta program right now.

In contrast to Android, where Edge Canary is a dedicated app that co-exists with the stable version on Google Play, Microsoft uses the TestFlight program with limited availability. It means that only up to 10,000 users can sign up to test early versions of Microsoft Edge on iOS. In other words, act fast if you want to participate. Also, to download Edge beta on iOS, you need a modern iPhone, iPod, or iPad with iOS 13 or newer. 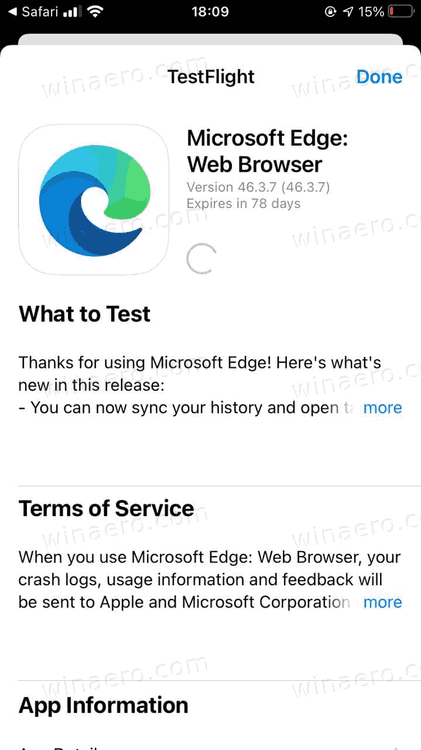 It is important to note that you need to actively use Microsoft Edge on your device to remain in the program. Because the availability is limited, Microsoft wants to keep only active testers that use the browser and provide valuable feedback.

The new beta testing program for Microsoft Edge on iOS is part of the company's plan to unify the browser's code base across different platforms. Until now, developers had to code every single feature separately for desktop, iOS, and Android. This inconvenience was causing significant delays between Edge releases on mobile.

On Android, Edge Canary now uses the same Chromium build as a desktop counterpart. Because Edge on iOS runs on WebKit, not Chromium, some differences between versions will remain. Still, the unified code base will help  significantly speed up development. Perhaps, Microsoft Edge on mobile will no longer lag behind Edge on desktop.