Yesterday, Microsoft's Rich Turner announced that Bash on Ubuntu in Windows 10 had left the beta stage. The company now considers it a finished feature fully supported in the upcoming Fall Creators Update. The final version of the Linux console is already included in build 16251 and will arrive in the production branch this fall.


The following screenshot demonstrates the item in the Optional Features window: 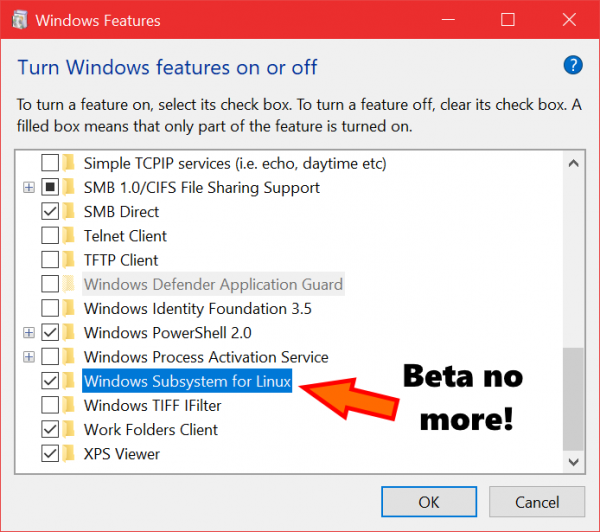 Notice that it doesn't come with the BETA suffix any more.

As you may already know, the Bash console is intended to be helpful for developers, mostly web developers, who can run native Linux daemons and binaries in a familiar environment. No virtual machines, and no remote servers are required when you have the Windows Subsystem for Linux enabled. Developers who prefer Windows 10 over alternative operating systems and over previous Windows versions are probably happy to have this tool in their arsenal.

In the current implementation, there is no way to run the GUI (graphical user interface) portion of Linux. An X server is not implemented in WSL. But there is an unofficial solution which you can use (see the following article: How to run Linux GUI apps on Windows 10 in Bash), although it is not supported by Microsoft.

Also, I noticed some apps like Midnight Commander may have issues with hotkeys.

If you are interested in trying WSL yourself, read How to Enable Bash On Ubuntu in Windows 10 Fall Creators Update.

You can read the full official announcement HERE.