In Windows 7, Microsoft added a new program which was not available in previous Windows versions. PSR.EXE, known as Problem Steps Recorder and later renamed to just Steps Recorder, is a tool to record screenshots of any activities you do at your computer when you click and add an annotation. This is very useful for troubleshooting. In Windows 10 Creators Update, PSR is being discontinued!


The Steps Recorder had a built-in keylogger, a screen capture feature, and an annotation tool. It was created for troubleshooting and compatibility purposes. Once the user collected the information, he could send it to a friend or a tech support person to show what steps he did exactly on his PC.

According to Microsoft, it won't be supported any more. The Game Recorder (Game DVR), which is part of the Xbox app is recommended by Microsoft to be used instead. The following dialog appears when you try to run PSR.EXE:

If you click Yes, a web page will be opened which explains how to use Game Recorder. Note that in Windows 10 build 15014, the PSR app is still available and can be used to record your steps. 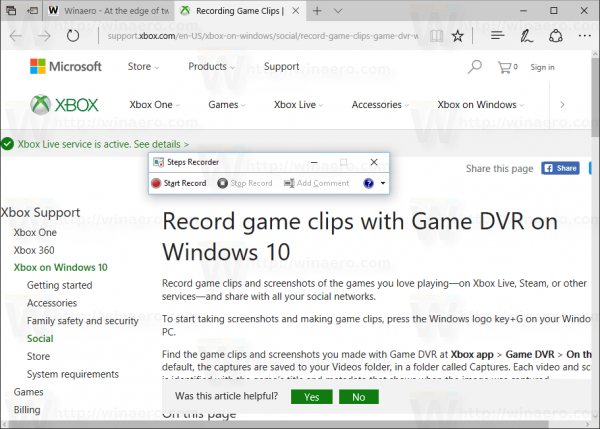 The Xbox Game Recorder, also known as Game DVR, is a built-in feature of the default Xbox app. It allows you to capture the contents of your screen and save it as a video (screencast). To activate it, you need to press Win + G shortcut keys on the keyboard.