The Snap feature in Windows 11 has got useful additions and is possibly inspired by Fancy Zones of PowerToys. The snapping process remains unchanged since Windows 10 and supports the same keyboard shortcuts. However, the new thing here is when you move your mouse  pointer over the Maximize window button on any open window, a pop-up will allow you to quickly pick the desired position of the window on the screen.

The leaked Windows 11 preview build has revealed a bunch of new features Microsoft is working on, giving us a clear idea of what the company calls the "next-generation operating system." There are plenty of changes, from the new Start menu, new taskbar, new sounds and a bunch of new wallpapers.

Besides the new look, there are a number of new features in the OS. One of them is window snapping. It includes 4 predefined layout, which appear as a preview when you mouse over the maximize window button.

Once your mouse pointer reaches the maximize button of any window, the following user interface will appear: 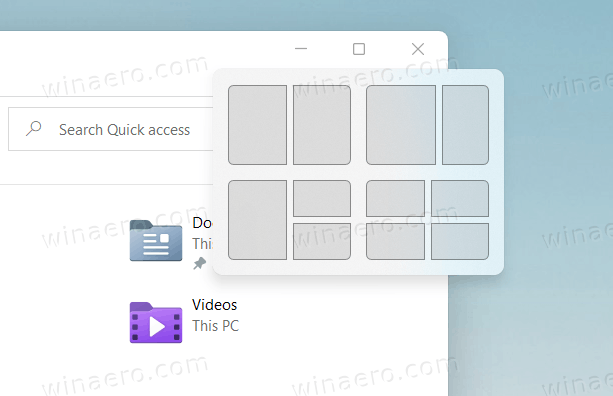 By click on the appropriate preview thumbnail, you will be able to

There's obviously some room for improvements. The Redmond software giant may add more Fancy Zones-like features to Windows Snap, including the ability to create your own layout templates to choose from.